Read more »
Posted by Mark Baker-Wright at 11:00 AM No comments:

For this inaugural episode of Not Your Father's Autobot, we're discussing the five issues of Marvel Comics' G.I. Joe comic (issues #138-#142) that served as a prequel to the Transformers: Generation 2 comic. These issues can be found reprinted in IDW's G.I. Joe Classics, Vol. 14, which is available digitally via Comixology at https://www.comixology.com/G-I-Joe-Classics-Vol-14/digital-comic (purchases through this link do not support the podcast in any way).
Read more »
Posted by Mark Baker-Wright at 8:00 AM No comments: 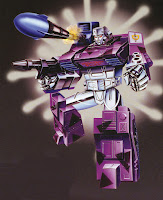 Although the period of time we now know as the Generation Two line was fairly brief, if understood as a fraction of the franchise's now more than 35 years of existence, I consider it an important time in Transformers history. I have thus decided to spend the next year (and change) giving some extra attention to that little window of Transformerdom. The main part of this focus will be a new podcast, which I'm calling Not Your Father's Autobot. This podcast will cover the whole run of the Transformers: Generation Two comic produced by Marvel Comics in the early 1990s. The first episode (well, actually, it will be "Episode 0," since I'm dealing with a few issues of the G.I. Joe comic that set up the actual G2 comic) will drop this Sunday. You can get it as it drops by subscribing to the RSS feed or, if you prefer, you can simply find it via this blog on Sunday. This blog will also be the primary place to leave comments on the podcast, as well, and I invite you to give it a listen! Thanks in advance.
Read more »
Posted by Mark Baker-Wright at 10:00 AM No comments: