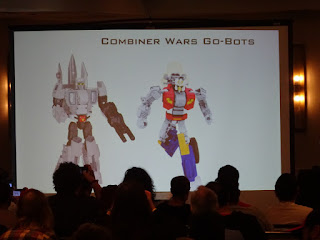 I spent this past weekend at TFcon in Burbank. While I took more pictures there than I can reasonably share in a single blog post, I thought a more focused entry sharing some of the images from Bill Forster and Jim Sorenson's panel on production art would be appropriate. Here are some concepts that Fun Publications considered for club and convention exclusives that didn't quite make the cut.

It's not too uncommon to see a character given more than one toy within a Transformers line, but usually this happens with what might be called "first tier" characters such as Optimus Prime, Bumblebee, or Starscream. When a character like Brawn, who's only been given a small handful of toys in the entire 35 years of Transformers history to start with, is given two toys within a single line, it raises eyebrows. Nonetheless, that's exactly what happened within the Titans Return line.