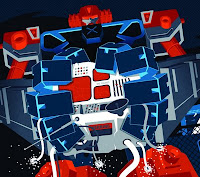 I'm about to write a sentence that neither I, nor anyone who knows me even a little bit, ever thought I'd have to write at the beginning of a blog entry.

If you came here looking for something pornographic, you've come to the wrong place. 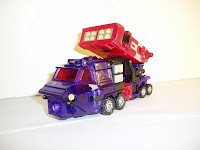 I'll explain why it became necessary to write that sentence in a bit. First, let's get down to the business of talking about Heatwave, the most recent Transformers Collectors' Club (TCC) incentive figure. Heatwave arrived in the mail just as BotCon was starting up, and I'd already committed to two straight weeks of BotCon-related material, so the Heatwave feature simply had to wait until now. Heatwave is a redeco of Energon Barricade, and transforms into a mobile weapons battery (not all that dissimilar from Flak, actually).

Like all of the other club incentive figures since 2005, Heatwave uses a considerable amount of clear plastic. I'm actually quite fond of this kind of plastic, in terms of making for attractive and unusual toys, but I have to admit that I'm beginning to be a bit concerned about comments that the clear plastic is more brittle and prone to breakage than the plastic used on most Transformers toys. I guess I'll just have to be careful. 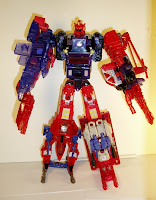 Heatwave is final part of a club combiner figure, made of the five club incentive toys released so far. Unlike the other toys, which featured no remolding whatsoever, Heatwave was given a new remolded head for the combined form, which is called "Nexus Maximus," and this gets to why I had to include that disclaimer at the beginning of the article. When TCC was creating this figure, they had intended it to be given a name with "Prime" in it (possibly "Nexus Prime," for example), and they even included a "Prime" reference to the combiner a few years ago in the club comic story, which has been building up to the introduction of this character ever since 2005. But as with all Transformer names, TCC had to clear the name they wanted with Hasbro, and they had to submit several alternatives, in case their first choice didn't work out for whatever reason. At least one other name they submitted included the word "Maximus" (I think it was "Maximus Prime," but won't swear to that. We weren't allowed to audio record the forums at BotCon, where this information was revealed). Hasbro has apparently become rather protective of the "Prime" name these days (after all, Optimus Prime is their most iconic Transformers character), and they said, in essence, "Well, we see you've got this word, 'Nexus,' and this word, 'Maximus,' so we'll let you use 'Nexus Maximus' as the name of your character." What Hasbro apparently did not think to do was do a Google search on the name to see if anything unsavory would come up. Pretty much the same day that "Nexus Maximus" was revealed to the general public, it was pointed out that the top listing on Google for that term was not a Transformer, but rather was the kind of item you might find in a XXX store. Definitely not safe for work (and there's no way I'm gonna provide a link)! The damage was already done, and there was really nothing left to do but tell Transformers fans, "hype up 'Nexus Maximus' (the Transformers club character) all you can, so that it will show up at the top of the Google searches!" (Actually, it was implied at BotCon that Hasbro did do a Google search, but we were told that they routinely do such searches with the "SafeSearch" feature turned on. Even if this is true, such a search by definition would exclude any such "unsavory" matches, so I reassert that they therefore did not think to look for anything like that. Perhaps they do the searches to see about possible trademark conflicts? Honestly, I'm not sure why else they would do a search if not to see if the name identifies with something they don't want a Hasbro product identified with!)

Like all Energon-era combiners (from which all of these toys originate, in terms of the molds used), you can swap out the limbs in any configuration you want (or even replace a limb with another Energon combiner mold figure). The configuration above is actually not the one suggested by the instructions that come with Heatwave (which tells you where to put the limbs, but not actually how to transform the limbs into the "limb" configuration! The TCC provided a link to instructions at one point, but the closure of the club means that link no longer works, and it was not archived by Archive.org. Sorry!). Instead, I've opted to combine Nexus Maximus in the formation that the club comic depicted him in a couple of years ago, when the only hint we had as to the combiner formation was a crude "cave drawing" on an ancient wall (of course, that "cave drawing" uses the Barricade mold's original head, rather than the one created for Nexus Maximus). Call it "personal preference" if you want. I just like it better.
UPDATE:  As of September 27, 2009, it has been reported that the name of the combiner as featured in the Official Transformers Collectors Club comic is Nexus Prime, in keeping with the original intention.
Posted by Mark Baker-Wright at 12:00 AM