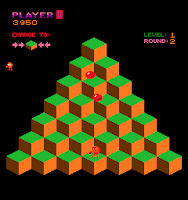 Although I haven't actually seen the movie yet, the release of Disney's Wreck-It Ralph in theaters this month is one that has relevance for these video game posts. In case you haven't heard about it, the movie features a 1980's style video game villain (the eponymous Ralph) who tries to transcend his role and do something good for a change. Although Ralph and the game in which he is featured are newly-created for the movie, Wreck-It Ralph features a number of actual video game icons in a series of cameo appearances. Among these is the hero of this month's game, Q*bert. 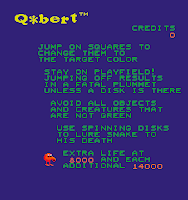 It's not hard to understand why Q*bert is such a memorable character. The character has a unique appearance, his name is an obvious pun relevant to the field of cubes he hops on, the game play is very simple (all the rules you need are helpfully featured on one screen during the "attract" phase that most games play while waiting for someone to come by and feed them quarters), the character was one of those featured in a Saturday morning cartoon during the era, and (perhaps most important of all for the intended audience of young adolescent boys) the character features perhaps the earliest known use of cartoony "swearing" in a video game, seen whenever Q*bert loses a turn. 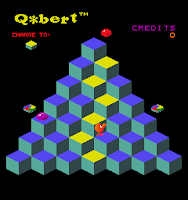 The basic idea of the game is that Q*bert must change all of the cubes on a pyramid to a designated color by hopping on them while avoiding various obstacles. When the game starts, this is pretty easy, as once you've hopped on a cube once, it becomes the target color and stays that way no matter how many times you hop on it again. Later rounds increase the difficulty by making Q*bert hop on a cube twice to reach the target color, or by causing the cube to revert back to a previous color should Q*bert hop on it again after achieving the target, forcing him to have to go back and hop on it again to put things right.

Q*bert isn't the only character to feature in this game, of course. The little orange nose-monster must also contend with a snake named Coily, a couple of purple ogres named Ugg and Wrong-Way (who apparently defy gravity by hopping only on the sides of cubes, rather than on the top), and some green fuzzballs named Slick and Sam (who will reverse Q*bert's progress on the cubes he's hopped on by changing them to another color). There are also a series of red balls that fall down the pyramid that Q*bert must avoid if he wishes to survive. 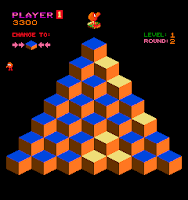 In a tight pinch, Q*bert can hop on one of a number of spinning disks to the side of the pyramid. If he can successfully lure Coily to follow him off of the pyramid, Coily will plunge to his doom and the pyramid will be cleared off of all other obstacles while Q*bert is transported safely to the top. Naturally, this is where the most points can be obtained (not counting end-of-round bonuses, which increase for every round completed).

Not all items are bad, however. As the instructions indicate, Q*bert may safely hop on any green object. This not only includes Slick and Sam, which helps Q*bert by stopping them from changing the cubes back to colors Q*bert isn't trying to achieve, but also a series of green balls that fall from time to time. Despite looking like little round trip-hazards, if Q*bert lands on one of these, he will not only not lose a turn, but the entire board will freeze for a few seconds, allowing Q*bert to safely hop around — and even through otherwise deadly obstacles — changing cubes to the desired color.

Q*bert is perhaps one of my favorite games of this era, and I still pull it out to play from time to time whenever I feel like a bit of mindless puzzle-solving (if such a phrase makes any sense at all). It's well worth looking for if you don't already have a version available.
Posted by Mark Baker-Wright at 9:00 AM No comments: