Before Reflector. Before the Omnibots. There were the Powerdashers.

Well, maybe that stretches the point just a little bit. After all, the Omnibots were made available on the very same flyer as the Powerdashers, which introduced the concept of mail-away exclusives to young Transformers fans in 1984. But I still think there's a case to be made for the Powerdashers being the first.

Long-time readers will already be aware that all of the first toys to bear the "Transformers" brand were, in fact, reuses of molds that had been made for other toy lines, most notably the Japanese "Diaclone" line produced by Takara (which, in their current incarnation as TakaraTomy, still produces Transformers toys in Japan today). The Omnibots were all originally Diaclone toys produced under the "Double Changers" name during their 1983/84 line. The Powerdashers, called simply "Dashers" when released under Diaclone, were produced in 1982! So even if one assumes that the Transformer Powerdashers came out simultaneously with the Omnibots, it remains true that the Diaclone Dashers preceded the Double Changers. 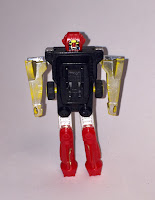 Frankly, that extra year's worth of design evolution shows. The Sky Dasher (officially named "Cromar" in an IDW comic in 2013, reflecting a name used in a pre-Transfomers US release as part of the short-lived "Diakron" line) is simplistic even by early 80s standards, with no meaningful articulation beyond that required for transformation, and even needing a sticker to give his facial features (the only other first-year Transformers to require stickers for entire faces are the other Powerdashers and Ratchet/Ironhide, the latter of which didn't really even have heads)!

That's not to say that the Powerdashers don't have saving graces. Their main feature was a pull-back motor that allowed them to zip across the floor in vehicle mode. These motors were later used for other Transformers toys such as the Mini-Spies and the Throttlebots. A simple gimmick, to be sure, but fun all the same. Especially if one has a cat to tease with it! ;)