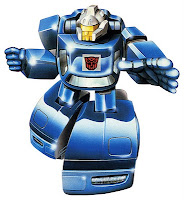 From 1984 to 1986, the Mini Vehicles line of Transformers served the Transformers line well, offering children fully transformable toys at a low price range.  But by 1987, Hasbro had run through the molds they had inherited from the Japanese Micro Change line, having already retooled many of those molds for the 1986 line.  It was time to try something new, attempting to meet the demand for toys at (about) the same price while recognizing the added expense of paying for new designs and rising prices for raw materials.  The Throttlebots were the first attempt at such new toys for this price point.

Like the Mini Vehicles before them, the Throttlebots were all Autobots (perhaps the team name "Throttlebots" was a clue).  Besides their comparatively small size, the Throttlebots also shared a gimmick: pull-back motors that (like the Mini-Spies that came a couple of years before) allowed them to race for a short distance across a table or the floor.  No doubt the added action feature was an attraction to many children. 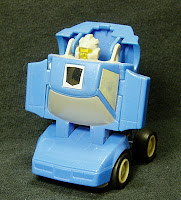 The play feature probably also served, at least for a while, to make up for the comparably limited robot modes.  All Throttlebots had exactly the same transformation.  Pull the shell of the car up, push the wheels forward, pull the back of the car down to reveal the head, and swing the side panels out for the arms.  Even for toys of this era, this was sub-par for articulation (that is, there was none!).  But at least the pull-back motor still worked, even in this mode (the Mini-Spies couldn't do that!). 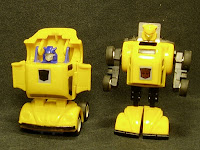 Ultimately, the simplistic (and similar) toys made most of the Throttlebot characters (including Freeway, who's managed to go unnamed through this entire blog entry up until now) pretty forgettable as distinct entities.  In fact, the artists had a tendency to forget who was who pretty often, and seeing panels of miscolored and/or misnamed Throttlebots was not uncommon.  One notable exception to this was Goldbug, who was created to be a new version of the popular character, Bumblebee.  Since Mini Vehicles were no longer being made, Bumblebee's original toy could no longer be sold.  Someone at Hasbro must have really liked him, because the effort to keep the character around in this way was unprecedented for the Transformers line (some wise-aleck's going to tell me that Rodimus Prime/Hot Rod did this first, but I see that as an entirely different phenomenon, so there!).
Posted by Mark Baker-Wright at 12:00 AM