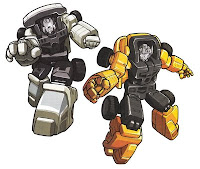 I've mentioned before that all of the first year or two's worth of toys in the Transformers line were not, in fact, "new" toys, but used molds that had been created for entirely different lines in Japan, notably "Diaclone" and "Microchange." The "Transformers" brand was only new in terms of marketing, and in creating the storyline that went along with it. This repurposing of Japanese brands for Hasbro's American audience extended even to the very first pack-in promotions done for the Transformers line: a set of especially small Transformers called "Mini-Spies" that came packaged with the regular Mini Vehicle (often called "Minicar") assortment that included such favorites as Bumblebee.

Speaking of marketing, here's the commercial that advertised the Mini-Spy promotion:

The commercial demonstrates the use of the heat-sensitive "rubsigns," which were used on Transformers for the first time with these toys. Although later Transformers would all have these rubsigns, when the Mini-Spies were released, they were the only Transformers to use them (EDIT: See comment below), allowing for the mystery of not knowing which faction the toy was a part of until you rubbed the sticker (or exposed it to a heat source). The use of the rubsigns on Transformers was novel enough that Hasbro actually got a patent on the concept. However, like all other Transformers toys at this time, the Mini-Spies were not created to be Transformers (they came from a line called "Mecha Warriors"), and thus were not actually intended for use with the rubsigns. The TFWiki implies that rubsigns were created in order for Hasbro to assure consumers that a toy was a true Transformers product, but I'm not convinced. Although Hasbro always said (with later toys that used rubsigns) that the rubsigns were there to prove that a toy was a real Transformer, I just don't see why Hasbro would have bothered introducing the rubsigns with this promotion if authentication was always their intent.

Besides the rubsigns, these toys also featured the first pull-back motors to be used on Transformers, allowing for added play value. 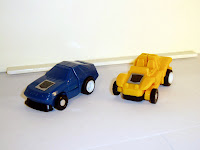 Although I only have two Mini-Spies, there were actually four different molds (The FX-1 type and Buggy type seen here, and also a Jeep type and a Porsche type), each available in three different colors (white was the other color), and each could be either an Autobot or a Decepticon. In case you haven't done the math, that means that there are 24 distinct variations out there. Although these were packed visibly on the cards with the Mini Vehicles, so you could know which color and type you were getting (it was a bit more difficult to discern the faction in-store, although that didn't stop us from trying!), there were quite a few more Mini-Spy varieties out there than there were Mini Vehicles, so anyone who tried to get a complete set would have had to have bought multiples of the regular toys (as was also the case for the similar, but later, decoy promotion). I don't know anyone who even attempted this back in 1985 (I'm sure such people exist), but a few folks have completed their sets since due to the miracle of the Internet. 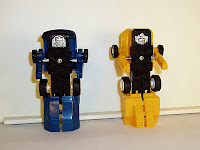 In this modern era of improved toy technology, "completing the set" is probably the only reason someone would want more than a couple of Mini-Spies. As toys on their own, these things are pretty puny. I can see why Hasbro never sold them separately, although as a "bonus," I think they did their job admirably. And in terms of historical value, they're definitely worth noticing (if you care about the history of toys, in any event).

Incidentally, after I finished writing my first draft of the entry, Reprolabels announced "upgrade stickers" specifically for the Mini-Spies! I haven't yet decided whether I'll invest in these, myself, but they're worth taking a look at (incidentally, the picture over there shows a red Mini-Spy. This is clearly a pre-Transformer, and not a Hasbro Mini-Spy. For what it's worth, the original Mecha Warriors didn't come in Yellow or White!).
Posted by Mark Baker-Wright at 12:00 AM