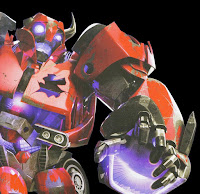 For Halloween, I thought it would be appropriate to feature an example of a Transformer zombie. To explain how "Terrorcon" Cliffjumper came to be, however, I need to set up some back story. 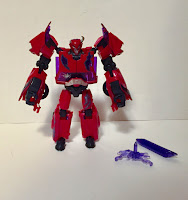 Before the Transformers: Prime cartoon premiered in 2010, early publicity announced a major voice-acting coup for the show. Wrestling superstar Dwayne Johnson, better known as "The Rock," was confirmed to play Cliffjumper, who was said to play a key role in the then-upcoming series. Imagine the surprise of viewers everywhere when Cliffjumper was killed within the first few minutes of the very first episode! 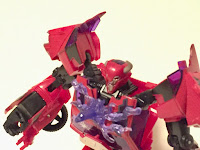 But although Cliffjumper's death may have caught fans by surprise, Hasbro really wasn't being untruthful about the key role he was to play in the Prime storyline. The Decepticons brought Cliffjumper's corpse to their ship, where Megatron quickly used the body as a test subject for "dark energon," a mysterious source of power that reanimated Cliffjumper's body to a zombie-like state that Megatron was then able to use against Cliffjumper's Autobot allies. Dark energon would go on to become a recurring plot device throughout the series, especially in its first season. 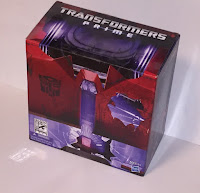 Dark energon's importance to Prime notwithstanding, Cliffjumper's short tenure makes it perhaps surprising that the character got a toy, but it turned out that several were made, covering Cliffjumper in both life and death. In fact, the San Diego Comic-Con 2012 Terrorcon Cliffjumper isn't even the first appearance of the "zombie" mold, which first appeared as part of the "First Edition" line of Prime toys (and which, itself, was remolded from a "standard" version also available in that line). There aren't a lot of changes, mostly just a few paint applications, between the original version and the convention exclusive, so let's focus on the packaging for a bit. The main package is designed to resemble Cliffjumper's shattered chest on the front, with the words "Rust in Piece" on the side. The back is a more standard set of images of the toy with descriptive material. 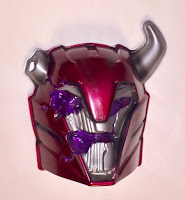 Inside the package, one finds that the toy comes in a special case designed to resemble the un-dead Cliffjumper's head. I honestly don't know that it was intentional (although I suppose that it's likely enough) but the head is more-or-less scaled to the image of the chest on the box, and I've seen at least one image online that has the head displayed on top of the box. 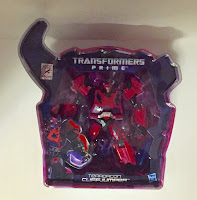 The flip side of the case provides a display option of its own, showcasing the toy in robot mode. Just visible in the case are the two "dark energon" accessories packaged with the figure. Although the toy itself has no mold changes from the "First Edition" Terrorcon Cliffjumper, these accessories are indeed unique to the SDCC version. To this day, I'm not entirely sure what one is supposed to do with the large shard, which doesn't really fit in either of Cliffjumper's hands, but the smaller shard is designed to fit over Cliffjumper's chest (as seen above), so one can re-enact Cliffjumper's reanimation, if one so chooses.

Although Cliffjumper is never seen to transform into his vehicle mode post-reanimation in the cartoon, the Terrorcon Cliffjumper toy retains the vehicle mode of the "living" version of the toy, with added battle damage to make it clear that this is still the un-dead character. Like many Prime-era figures, I find the transformation unnecessarily complex for a deluxe-sized figure. Between this complexity and the fact that the figure uses a large amount of transparent purple plastic (transparent plastic tends to be more brittle than its opaque counterparts), I try not to change this figure too often. The concept of this toy is scary enough. I hardly need to add to the suspense by undertaking actions that might break it!
Posted by Mark Baker-Wright at 9:00 AM