The modern era of Transformers toys has provided numerous opportunities for toys of characters with increasingly obscure origins. Some are easily explained simply by providing the reference to their origin and being done with it (say, for example, Stripes and Nightstalker, cassettes that came with the 2012 Encore reissue of Twincast). Others require going into more detail. Such is the case with Wipe-Out, a Japanese exclusive redeco of Reveal the Shield Windcharger.

Wipe-Out was a non-toy character that made a single fictional appearance, in issue #27 of the Marvel Transformers comic. This issue was notable (among several reasons) for being the sole appearance of Trypticon in that series. The fact that Trypticon made only one such appearance is, itself, noteworthy, as Trypticon was a large toy that Hasbro clearly wanted to market heavily, and Trypticon made several appearances in the cartoon as a result. In any event, Wipe-Out appeared as a scout for Trypticon, and was promptly destroyed within that same issue by the Dinobots and never so much as mentioned again.... 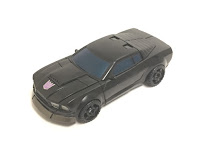 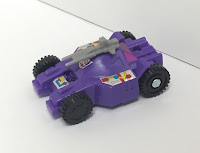 What's perhaps even more odd about this whole situation is the question of why Bob Budiansky (who wrote issue #27) even felt the need to create an all-new character for Wipe-Out's role in the first place, as the Trypticon toy actually came with a ready-made minion in the form of Full-Tilt. Much like Scamper was a cheap car that came with Metroplex for added play value, Full-Tilt was a cheap "extra" that came with Trypticon. Why the character of Full-Tilt didn't appear in Wipe-Out's role is not known, but you can see the little purple vehicle attached to Trypticon's chest as part of the Trypticon character model, so if you like, you can still say that Full-Tilt was there. 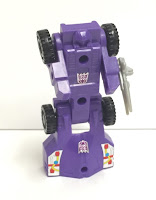 While it's safe to say that both Wipe-Out and Full-Tilt fall into the category of "obscure" characters, known for little more than their mutual connection to Trypticon, they have not been forgotten in the recent release of a new Trypticon toy in the Titans Return line, which features a new Full-Tilt in his traditional role as vehicle who doubles as a chestplate for Trypticon, but now Full-Tilt has a detachable head that transforms into a tiny robot named "Necro." Close inspection of Necro reveals that his robot mode is indeed that of Marvel's Wipe-Out. It appears that Wipe-Out has simply been given a new name.
Posted by Mark Baker-Wright at 9:00 AM