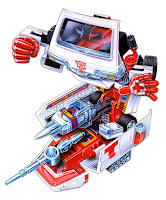 It's been a while since I've dealt with a Generation One figure, so this week I'm showcasing my favorite Generation One character of all: Ratchet. Ratchet is the Autobot's chief medical officer, and appropriately turns into an ambulance (or, at least, a van that's had ambulance markings stickered all over it). Ratchet plays a rather important role in at least two major arcs of the '80s Marvel Transformers comic. In both instances, he practically single-handedly defeats Decepticon leader Megatron despite the fact that, as a surgeon, Ratchet claims to have no skills as a warrior. Yay for brains over brawn! 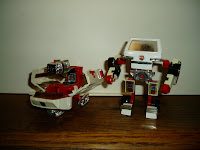 A quick glance at this figure's robot mode, and most people will instantly ask the same question: "Where is Ratchet's head?" It's a fair question. Indeed, this rather pathetic excuse for a robot form has probably already led most of you to wonder, "Why is this guy Mark's favorite?" If the toy were all there were to Ratchet, I'd have to agree. This is definitely one case where nostalgia due to a character's fictional depiction overrides common sense when it comes to affection for that character's toy. But having already explained Ratchet's important role in the comics, perhaps a bit of a history lesson is in order. 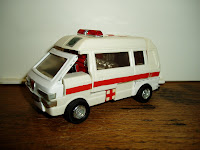 The original Transformers toys did not actually start out as "Transformers," but were in fact created for one of a couple of different Japanese toy lines that Hasbro brought to the United States. With the help of Marvel to create a unified storyline for these diverse toys, which only had the idea of transforming from one form to another in common, the concept of "Transformers" was created. Ratchet was actually created for the "Diaclone" line, which also gave us Overdrive, which I reviewed back in February. In the Japanese backstory for Diaclone, the robots were not actually considered sentient beings in their own right. In fact, the Diaclone robots were actually mecha, piloted by human beings. This concept shows up a lot in Japanese fiction, but was relatively uncommon in the United States at the time. In any event, although many of the piloted mecha of the Diaclone line did, in fact, have humanoid heads, it wasn't really considered all that big of a deal if they didn't. In the case of the mold from which we get the Ratchet figure, the Diaclone version came with a tiny figure that was supposed to sit in a chair just behind the windshield. That "chair" is still there in the Transformers version of Ratchet, but Hasbro attempted to give the robot a "face," by giving kids a dark sticker with a "face" that could be placed on the back of that chair to be seen through the windshield. You should be able to see that "face" if you click on the robot pictures to get the full-sized version. It's not very convincing, I agree, but that at least answers the question of where Ratchet's head is. 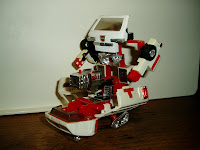 If nothing else, the Ratchet toy is notable for also coming with a "base" accessory, which the robot can ride on if one so chooses. Sadly, this was the only toy version of Ratchet available for quite a long time, and it's debatable whether or not this character has ever gotten a decent robot form. The BotCon 2005 version (scroll down after clicking the link to see the picture) isn't at all bad, but is one of the rarest and most expensive exclusives out there. Maybe someday when I win the lottery (which I pretty much never play, so that could be a while), I'll get one. There does seem to be some hope on the horizon, though. Ironhide, a character depicted by a recolor of this toy back in Generation One, is slated for a new toy in the coming months. It has been all but promised that Ratchet will be a repaint of that mold. If this is true, fans who have been waiting for nearly 25 years for a decent transformable version of Generation One Ratchet at an affordable price may not have to wait much longer.

EDIT: Long after I'd written this review, but before it actually posted (maybe only a day before, but still...), Big Bad Toy Store listed a new custom product designed to give actual physical heads to these toys. I have not yet seen pictures of what they look like when placed on actual figures, but fans may consider this custom project worth their time.
Posted by Mark Baker-Wright at 7:00 AM