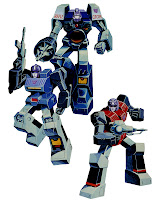 OK, I admit it. I'm cheating a bit this week. Most of this post was originally written a few years ago, and posted here before I was doing weekly Transformers features. I just decided that Reflector needed to be brought into the series more properly, and took the opportunity to clean up the text, correct some information that I'd gotten wrong, provide some additional links that I didn't have before, and fix a few broken ones.

Most fans who remember watching the original Transformers cartoon back in the 1980's remember a character named Reflector. Reflector was a camera that split apart into three identical (or nearly so) robots. Yet this fondly remembered character never appeared in toy stores due to what was apparently a late decision by Hasbro not to offer the 3-robots-in-1-camera toy (which they had licensed from the Japanese company Takara, and which had been part of their “Microman” line) for regular distribution. The TF cartoon bible (excerpts of which can be found here) lists Reflector as one of the original Decepticons, but also notes that the toy was discontinued, with instructions not to use the character in future episodes. This no doubt explains why most of Reflector’s cartoon appearances were in very early episodes.

Having already secured the rights to the Reflector mold from Takara, Hasbro needed to find a way to distribute it, and so in 1986 (ironically well after the cartoon had stopped depicting the character) they made Reflector available as a mail-order exclusive, much as had been previously done for the Powerdashers and Omnibots. Reflector was notable for being the only Decepticon to be made available only through mail-order in over 20 years of Transformers history, a distinction held until club exclusive Landquake appeared back in 2006. 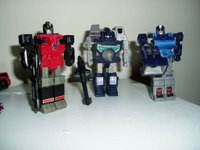 While the toy version of Reflector consists of three robots that combine into one camera (as in the cartoon), the three toy robots are not identical (as the cartoon Reflector robots were—notwithstanding the camera lens on one robot of the trio). Hasbro also took the step of giving each of the individual robots names: Spectro (the red robot), Viewfinder (the middle robot), and Spyglass (the blue robot on the right). One imagines that if Hasbro had colored Spectro blue like the other two robots, the illusion of three nearly identical robots would have been more closely maintained, but Hasbro colored their version of Reflector pretty much the same as the Takara Microman version, which was created without the need for such considerations.

This isn’t to say that Hasbro didn’t bother creating anything new to make their version distinct from previous versions. In addition to creating a new sticker set with “Reflector” (instead of “Microx”) along the top and adding Decepticon faction symbols, Hasbro created a full bio and tech specs to be included with Reflector’s instruction booklet. This is especially notable since Hasbro did not create tech specs for the previous mail-order exclusives. However, only tech specs for Reflector as a unit were created, as opposed to separate bios for Spectro, Viewfinder, and Spyglass. In fact, the tech specs for Reflector make absolutely no mention of the fact that the camera can split into three separate robots!

Each of the robots is roughly the same height, just under 4 inches tall. This makes them just barely taller than the average Action Master. Spectro and Spyglass both have die-cast metal chests, while Viewfinder has a die-cast metal core to which plastic features are attached on both front and back. All three robots have arm articulation at the shoulders, and both Spectro and Viewfinder have normal knee articulation (Spyglass has reverse-knee articulation, necessary for transformation.). All three robots have some form of hip articulation, as well (Viewfinder and Spyglass’s legs can bend either forward or backward, but Spectro’s legs only bend backward). In addition, all of the robots have chromed thighs, although most of this has flaked away in my specimen after more than 20 years of wear and tear. Finally, it is worth noting that all three robots have distinct legs that can move independently of each other, a feature not to be taken for granted in Transformers of this era.

Transformation to camera mode is fairly simple. Each robot folds in half (Spectro and Viewfinder’s legs fold up behind the torso, while Spyglass’s legs fold up in front), and the Spectro and Spyglass are attached to either side of Viewfinder by aligning several pegs. Separate attachments for the lens and flashcube are then attached to the camera. 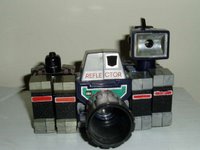 The resulting camera is about 2 1/4 inches tall (2 1/2” if measured to the top of the flashcube), too small to be considered a “life-sized” camera. The flashcube is chromed but, as with the robot thighs, this has mostly been worn away on my specimen. Camera features include a lens-and-mirror assembly inside Viewfinder that allows you to look through the back of the camera and see objects on the other side (though not very clearly), and a shutter at the top of Spectro’s head that allows you to push down with a reassuring “click” and “take a picture.” It should also be noted that the flashcube has a hole in the middle to insert a missile to be launched (theoretically, as Hasbro took the spring out) by pushing down at the top of the flashcube. The flashcube may also be used in Spyglass’ robot mode.

Reflector makes a wonderful display item, both for its rarity and for its place in Transformers history as a seldom-seen cartoon character.
Posted by Mark Baker-Wright at 12:00 AM