There have been so many figures of Superman made over the years, I wonder if anyone has compiled a complete list of all of them. I am definitely not that person. In fact, this is the only Superman figure I own. This is perhaps especially odd, given that this particular figure represents a fairly distinctive time in the character's history: the mullet period.

Some background is in order. Back in 1992, the comic book world was ablaze with the news that Superman would actually be killed off by a previously unknown monster called "Doomsday." Even though it was known, even back then, that this "death" was not likely to be permanent, it was nonetheless big news, and in many ways came to exemplify the lengths that comic book publishers would go to in order to capture new readers in the 1990s.

When Superman did come back (toward the end of a complicated storyline that suggested four other candidates to the Superman mantle), he had apparently let his hair grow out while he was resuscitating. He kept his long-hair style for only a few years, having cut it back to its traditional length just in time for his marriage to Lois Lane in 1996 (a feat no doubt made easier by a concurrent loss of power in a preceding storyline, enabling normal scissors to do the job that normally would have snapped the steel in the effort). This figure, from the "Superman: Man of Steel" toyline (no relation to the recent movie), depicts Superman's flowing locks as they appeared during that brief time. 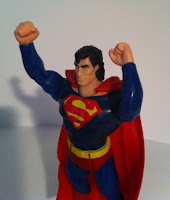 I no longer have the rather pointless "chains" that came with this figure (nor apparently, the collector's card, which is odd as I usually do keep such cards), but the figure does have a minor "action feature" that's fairly cool. If you raise the figure's arms upward, the head tilts up just slightly, to give the effect of Superman looking up as he's about to take off into the air and fly away. I do wish the effect was more dramatic, however. It's so slight that it's not really even noticeable in a still picture that the head's moved at all. You'll just have to take my word for it.

So, what do you think? Is Superman's long hair a greater travesty than the loss of his red "underwear-on-the-outside" look currently sported in the comics? Feel free to express your opinions in the comments.
Posted by Mark Baker-Wright at 7:00 AM