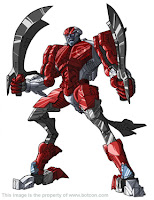 One of the oddities of BotCon 2015, currently in progress, is that so many of the exclusive toys this year are original characters. Back in the early days of BotCon, this was the rule, rather than the exception. Some fans argue that this meant a period of creativity that modern BotCons fail to match. While this is certainly debatable (and, indeed, will no doubt be discussed in relation to BotCon 2015 in the days to come), CatSCAN, from BotCon 2002, is almost undeniably an unusual concept within the Transformers mythos. 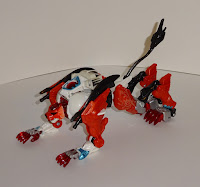 The toy itself is straightforward enough. CatSCAN is a redeco of one of the later Beast Machines Cheetor toys (albeit with glow-in-the-dark paint applications that are perhaps unique among Transformers of any era). What makes CatSCAN unusual is his origins as an artificial intelligence given corporeal form more or less out of thin air by Apelinq (himself a character from a previous BotCon). Like Star Trek: Voyager's holographic Doctor, CatSCAN has knowledge and data about medical procedures, but struggles to understand the world around him, and even the nature of life itself.

My specimen of CatSCAN was bought from Radio Free Cybertron host Brian Kilby, on behalf of his friend and podcasting colleague JD Church, who sadly passed away a year ago leaving behind a considerable collection. Brian and other RFC members have been selling off JD's collection in order to raise funds to help JD's widow, and still have some toys available that they're trying to sell at BotCon. If you happen to be reading this while you're there, I'd recommend looking one of the RFC folks up (the odds are at least some of them will be wearing distinctive blue t-shirts with "Radio Free Cybertron" printed on them) and asking about JD's toys. You'll be helping support a good cause, and may find an unexpected treasure in the bargain!
Posted by Mark Baker-Wright at 7:45 AM