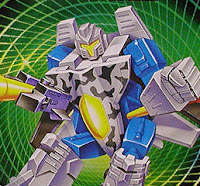 The practice of releasing a toy mold more than once, just using different colors to create a different character, has been a part of the Transformers franchise since the very beginning. However, for the first decade or so of the franchise's existence, such "repaints" or "redecos" always resulted in completely new characters not previously seen in the franchise. With the last year of the Generation Two line, this began to change.... 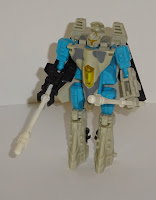 The first wave of Cyberjets to be released were all Decepticons, and were themselves all-new characters. When Hasbro decided to release these molds for a second time, the decision was apparently made to release them all as previously-known Autobots. The Cyberjets weren't the only sub-line of Generation Two* to see such familiar names used on previously-released molds. The Go-Bots, released at about the same time, offered the same practice. In the case of the Cyberjets, the Decepticons all used red plastic for the shoulders and thighs, so part of the switch to making these redecos Autobots was to replace the red plastic with blue.

At this particular point in Transformers history, little attention was given to making the new toy look like the previous toy that had used the character's name. No new head sculpt was created, nor was the color scheme used in any way referential of the original Jetfire toy. Jetfire fared a bit better than his wave-mates, however, in that his original toy did have the cockpit chest that was common to all Cyberjets. Also, the particular mold chosen for Jetfire (originally created for Hooligan) utilizes a swing-wing configuration, as the original Jetfire toy did. 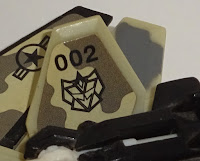 This toy is an example of perhaps one of the most glaring mistakes in the Transformers franchise. In making the switch from Decepticon to Autobot, the designers apparently failed to account for the faction symbols on Jetfire's rear fins, which proudly display the Generation Two Decepticon logo. This is perhaps doubly-ironic, as the cartoon of the 1980s had Jetfire as a Decepticon for a short time before switching sides to become an Autobot, but by this point in the character's history, his allegiance was firmly in place. Any attempts to explain away the Decepticon logo as anything other than a mistake may be a fun intellectual exercise, but it's hard to seriously argue that the designers didn't goof on this one!
*Technically, both the Cyberjets and the Go-Bots do not possess the "Generation Two" subtitle on their packaging, as it had been dropped at this time. Officially, the line had reverted to simply being "The Transformers" again. However, as Generation Two was retired less than a year later in favor of the radical line-change that was Beast Wars, it is now all-but universally accepted to refer to these toys as part of the Generation Two line.
Posted by Mark Baker-Wright at 7:00 AM