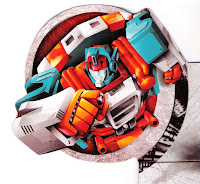 There is a sense in which the period between the end of the Beast Era and the opening of the first Transformers live-action movie in 2007 has become a "forgotten era" of the franchise. This is a bit of a pity, because it obscures the fact that this era introduced new worlds and concepts to the mythos. Before Cybertron, for example, the only worlds that played a significant part in the Transformers franchise (that is, outside of one-off episodes and stories) were Earth, Nebulos, and Cybertron. The Cybertron storyline started off by introducing three more, one of which was Velocitron, the "Speed Planet," from which we get Clocker.

It's not terribly clear in Cybertron itself, but Velocitron is apparently a lost colony world on which Cybertronians settled untold ages ago. In that time, the inhabitants of Velocitron developed their own distinct culture, one focused on racing. One is either a racer, or works in some way to support racing. There really is no other way of life. Thus, should be unsurprising that Clocker's vehicle mode is a speeding-looking race car. The toy designers further made the inhabitants of Velocitron distinctive by giving them clear plastic wheels (but don't ask me how such wheels are supposed to be faster than others, as this is glossed over in the fiction itself).

The other distinctive feature of the Cybertron line was the addition of "Cyber Keys" to the molds, which unlocked special features. In Clocker's case, this meant that the rear part of the vehicle would pop open to form a weapon (although the actual weapon barrels had to be pulled out manually). This assembly is removable, and thus could also be used as a hand weapon in robot mode. 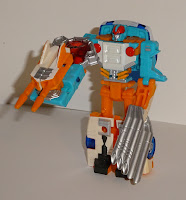 The exhaust pipes of Clocker's vehicle mode are also removable, although using them as hand-held weapons (claws?) looks a bit odd. Clocker was a fairly significant character for the Velocitron portion of the Cybertron cartoon, interacting heavily with Hot Shot (the impetus would-be leader of the franchise, following in the mold of previous characters like Bumblebee, Cheetor, and Rodimus). While the character archetype has shown up once or twice in fiction since Cybertron, he's largely been forgotten today, as has the "Scout" size-class in which his toy was made. Perhaps some future iteration of the Transformers franchise will revive the concept for a new generation of fans.