Whenever I write about a toy connected to Fun Publications, the folks behind BotCon and the Transformers Collectors' Club, I feel compelled to acknowledge that they have been the target of more than a little criticism from Transformers fans. Whatever merits those criticisms have, it's hard to deny that they manage to release some pretty special exclusive toys, and it's the toys I prefer to focus on here. This one is particularly special. There is a sense in which I've been waiting for this particular release since the club started, and I'm extremely happy to say that the day has finally arrived that I can say, "an official G.B. Blackrock figure exists!" 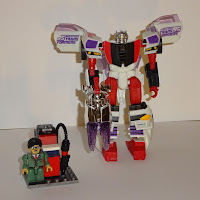 That's Blackrock in lower-left of the picture to the right, but I suppose I should first talk about the actual Transformer in the picture. Carzap is a character that has never had a toy released before, but homages a toy that Takara had proposed to come after the end of Generation Two, back in the 1990s. That toy would have been a repaint of an existing figure, alongside a LEGO-like brick set that would have been called "Block Town." Takara cancelled their "Block Town" plans, and thus Carzap became something of an obscure legend. The folks at Fun Publications seem to rather enjoy giving life to obscure legends, and so they took advantage of the fact that, nearly 20 years later, Hasbro had started doing a LEGO-like brick line (called Kre-O), to create this homage for their 2015 Figure Subscription Service.

Carzap is a repaint of a mold created for one of the plethora of Bumblebee figures out there. The Bumblebee figure in question is not terribly popular, but the use of a new head mold and a different color scheme has caused many fans to appreciate the mold in a new way. The chrome on the weapons is another source of divided opinion among fans, but itself homages the chrome weapon that would have come with the "Block Town" version, had it ever been produced. 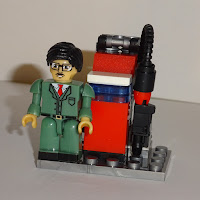 But let's get to the important stuff! This blog is called "Blackrock's Toybox," and this figure is the first official figure ever made of the blog's namesake, G.B. Blackrock, who arrives with Carzap in the form of a Kreon (the name given to humanoid figures in the Kre-O line). I've detailed some of G.B. Blackrock's story back in the old "Transforming Seminarian" days, so I won't repeat the details here, except to point out that the Kre-O gas pump he comes with is an extremely appropriate accessory. Having gone to the trouble of creating my own custom G.B. Blackrock figure many years ago (to say nothing of "Gary," the Muppet mascot of the blog, who also homages Blackrock, admittedly without a mustache), I am naturally thrilled to see an official version finally exist. Granted, because Carzap's bio makes clear that he comes from the club-created "Wings of Honor" continuity, this is not the same G.B. Blackrock as the one I grew to love from the Marvel Comics, but the homage is clear enough, and that's really a minor detail. 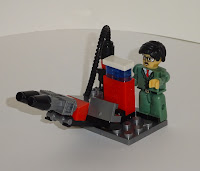 I'm a bit bothered by the fact that no instructions were given to show people how to assemble the bag of Kre-O parts into the gas pump accessory, but am pleased that a video has been made, which makes things quite clear (although you have to know to look for it!). The good news is that, once you've completed assembly of the gas pump, you can convert it to this laser blaster without removing and reassembling any parts (the Blackrock Kreon himself notwithstanding). Although this makes the gas pump a little Transformer base in its own right, I have to admit that this reminds me even more of the old MASK line. I'd still love to see MASK come back someday. In the meantime, I'm extremely happy with my G.B. Blackrock figure (oh, and Carzap, too!).
Posted by Mark Baker-Wright at 7:00 AM