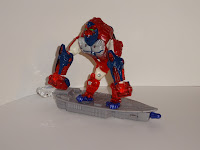 Of course, the very nature of this toy being a "custom" figure means that finished figures will differ from one another more than with figures with factory-applied paint. Also, my own painting abilities are far from commendable. Still, I wanted this figure to look as official as it could. A few weeks after the convention, I contacted "Cheetimus," a well-known fan who has an incredible reputation for doing customs of this kind, and who offers his services for a nominal fee. A few weeks after that, I got my figure back in all its multi-colored glory! 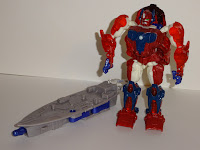 This figure is an homage to a figure released toward the end of the Beast era. The original Primal Prime was a redeco of Optimal Optimus, while this figure is a redeco of the Beast Wars 10th anniversary Optimus Primal figure, which (mostly) references Optimus Primal's original (televised) form. This hodge-podge of conflicting homages ultimately means that this custom class version of Primal Prime is not only considerably smaller than the original, but lacks most of that toy's features and alternative modes. Even the gorilla mode (seen above) is far more "gorilla-like" and less "techno-organic" than the original. It's as if Primal Prime has been significantly de-powered. 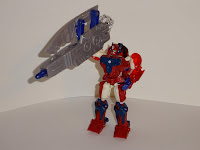 Another significant difference in this custom homage is that the original Primal Prime was heavily plated in red-colored chrome, whereas this toy uses translucent red plastic (the original toy also had some translucent red plastic, but this toy replaces all of the chrome with this effect), since chrome is not something that can really be applied at the end-user level (and, honestly, even if the ability was widely available, the current sentiment toward chrome is such that I imagine most would avoid it, anyway). Finally, there's the surfboard, which is an homage to Optimus Primal's Transmetal form, although in this case it is detachable and can turn into this ludicrous arm cannon which doesn't homage anything from the Beast era, but was included solely to help the 10th Anniversary mold fit into the then-current Cybertron toy line with its "Cyber key" gimmick (a measure taken to ensure that the trouble that went into making the new mold would not be wasted, even if the 10th Anniversary Beast Wars line failed to succeed).

I don't know how many of these figures were made available, but I do know that they sold out within the early hours of BotCon 2014's first night (Thursday), and so this is a hard figure to come by, especially in a fully painted condition. I would definitely recommend Cheetimus' skills to anyone.
Posted by Mark Baker-Wright at 7:00 AM