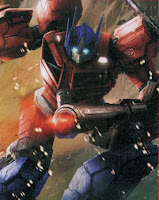 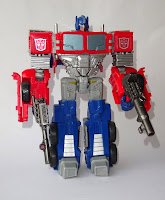 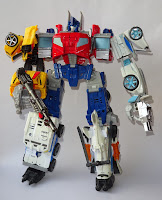 What sets this Optimus Prime toy apart from others is that (unlike Combiner Wars Megatron) it can become the core of a combined robot. Combiner Wars Optimus Prime's instructions suggest four other specific Combiner Wars toys (one of which is actually a Decepticon!) to team up with Optimus Prime to form "Ultra Prime." While I have all four of these other toys, I consider three of them to belong to other combiners (instructions notwithstanding), so what you see here is simply an example of what you can do with the Combiner Wars play pattern with other Autobots (Alpha Bravo, seen at Ultra Prime's leg, is the only one of the stated components I retained for Ultra Prime). Combiner Wars was intentionally set up in such a way that pretty much every Deluxe-sized toy in the line could be become a limb (either an arm or a leg) for pretty much any Voyager-sized toy capable of becoming a combiner core. This is an intentional homage to the "Scramble City" style of combiner from Generation One, but Combiner Wars really took the concept to a whole new level.
Posted by Mark Baker-Wright at 9:00 AM