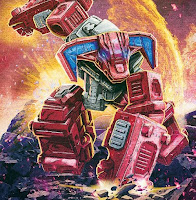 For nearly a decade now, the Generations lines of Transformers toys have more or less explicitly focused on homages to Generation One (the plural suggesting a more expansive view notwithstanding). That doesn't mean that the occasional homage to another part of the Transformers franchise never sneaks in, but these occasions are definitely more the exception than the rule these days. Even more noteworthy, however, are the occasions when a Transformers toy is an entirely new character. Smashdown, from this year's War for Cybertron: Siege line, is such a novelty. 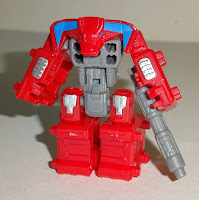 Perhaps even more unusual, especially for new characters, is the fact that Smashdown doesn't even have a humanoid robot mode. Rather, Smashdown resembles the mythical Minotaur. I'm pretty sure that this is the first time a Minotaur has ever appeared in the Transformer toyline's history, but the truth is, after 35 years, there are obscurities here and there that I might have missed. If I'm wrong, please feel free to provide an example in the comments. It's enough here to acknowledge that this form is an unusual one.

Smashdown is what the Siege line calls a "Battle Master," a concept that itself homages the Targetmaster of G1, but expands the concept to include melee-type weapons, such as Smashdown's hammer mode.* Although printed sources have yet to canonize this, a Hasbro exec has gone so far as to suggest that Smashdown is the "mascot" of a team called "the Wreckers." The faction symbol of the Wreckers is a modified Autobot symbol with a hammer incorporated into the face's nose and forehead, so I'd consider Smashdown-as-mascot a more than appropriate designation.

Another significant element of the "Battle Masters" toys, used throughout the War for Cybertron line, is that each comes with translucent battle effects that can be attached to various points... not only on the weapons, but on the larger figures themselves. The idea seems to be that one can use these to create a battle scene with the illusion of action taking place, despite being a static scene, similar to how comic books use such effects to illustrate the landing of a punch or similar dramatic effect. I was privileged to be at the San Diego Comic-Con Hasbro Preview Breakfast last year, representing the Allspark when the War for Cybertron line was being introduced, and I got a number of pictures of the extensive battle scene they created demonstrating how these battle effect pieces might be used. Have a look!

*The "Battle Masters" assortment provides further examples of "entirely new" characters. Perhaps I'll get around to featuring others someday.
Posted by Mark Baker-Wright at 9:00 AM