While it is true that animal forms have been a part of the Transformers franchise since the very beginning, the transition to the Beast era is marked by a move away from strictly mechanical approximations of animals to more organic forms. A focus exclusively on animals (as was the case when the Beast era began) also meant a wider variety of fauna being represented. It is hard to imagine a Transformer based on a pill bug (called a "roly-poly" when I was growing up) having come out during the "Generation One" era, but by the Beast era, such a mode was by no means unusual.

Powerhug, featured here, is a repaint of Retrax. If you haven't even heard of Retrax, don't worry too much about it. While Retrax came out as part of the American Beast Wars toyline, he was never featured in the cartoon (nor, indeed, in any other medium outside of the toys at the time, although he has shown up in various fiction of the 21st century). Powerhug, by contrast, made several appearances in the Japanese Beast Wars II cartoon, which was created to fill a gap between Japanese airings of the their dub of the first season of our Beast Wars cartoon and later seasons. 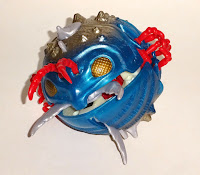 Sadly, no official English-language release of Beast Wars II has ever been released, so most of what I know about Powerhug... and of the Beast Wars II cartoon in general, is just what I read on the TFWiki. He looks to be a fun, if somewhat goofy, character, but I confess that I mostly got him just because I was amused that he exists at all (and my wife once told me that she liked pill bugs as a kid), and I thought that Powerhug's color scheme was more attractive than Retrax's.

I can't really recommend Powerhug's robot mode, which carries pretty much the whole of his pill bug mode on his back (although doing so perpendicular to the robot form strikes me as somewhat unusual) and has some of the stubbiest arms I've ever seen on a Transformer. You're not going to get a wide array of action poses out of this one.... ...although you can get Powerhug to live up to his name simply by activating the "roly-poly" trigger otherwise used for his beast mode. I honestly don't know if this feature was ever played up in the cartoon, but I can see some comedic potential here, as Powerhug crushes friend and foe alike in an over-eager effort to be friendly. Someday I need to track down one of the unofficial dubs I assume to be out there and see if I'm right.