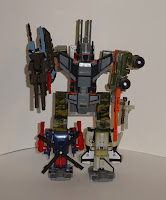 As the twenty-first century was just beginning, Hasbro found themselves with a bit of a dilemma about where to take the Transformers franchise. Hasbro and Takara were both working more-or-less independently of each other at this point, sharing ideas as each found it worth their time. The firm back-and-forth partnership that was to become more the standard in the next few years (at least in regard to Transformers) was not yet in place. With the Beast Machines cartoon having recently been completed, Hasbro had been working on a concept they called Transtech, but they decided to scrap those plans for reasons not entirely known even today. Takara, on the other hand, had finished up a line they called Car Robots about a year previously, utilizing a combination of new molds and old ones borrowed from the past. Having spent all that time working on Transtech, Hasbro needed to buy some time before their next big idea (Armada) would be ready for toy shelves, and so they decided to dub the Car Robots line (and its associated cartoon) into what they called Robots in Disguise. When Car Robots became Robots in Disguise, a combiner known in Japan as "Baldigus" came to America as "Ruination."

Ruination was comprised of five molds previously seen in Generation One as the Combaticons, but the toys were all given new identities for the new line(s). Onslaught, the leader, became Mega-Octane. The other team members, surrounding Mega-Octane and starting clockwise from the top, are Movor, Rollbar, Ro-Tor, and Armorhide.

All of the Ruination figures have new colors not only when compared to the Combaticon versions, but compared to the Baldigus versions that they still were intended to represent from the cartoon that came over to the US with little visual change. In fact, this is at least the fifth distinct color scheme these molds had been given (the G1 Combaticons, the Japanese Battle Gaia from Operation Combination, the G2 Combaticons, and Baldigus being the four precedents), with at least two more color schemes (and a later G1 reissue) still to follow.

Besides the main vehicle mode, robot mode, and combined form, Mega-Octane has one additional mode that's more-or-less a simple carryover from its origins as a Combaticon (and, more accurately, as part of Japan's "Scramble City" concept for most G1 combiners). It's basically just the back of the vehicle mode opened up with a ramp put in place, intended to be a kind of base for other vehicles (like Rollbar here?) to be launched from, at least in the original Japanese G1 version (the Car Robots version seems to lack this feature, but I couldn't tell you why), but American releases have always neutered the launching feature as being potentially unsafe for kids. 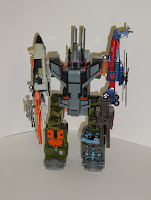 Another carryover from the "Scramble City" days involves Ruination's combined mode. While it has always been true that limbs from this style of combiner could be mixed-and-matched, so that arms could be legs and vice-versa, the Robots in Disguise cartoon actually used this feature in the fiction, something fairly uncommon in American Transformers fiction at the time (of course, remember that RiD was essentially just a dub of the already-existing Car Robots cartoon). When the aerial units (Movor and Ro-Tor) were used as the legs, as seen in the first image above, Ruination was said to be "Land Mission" mode, with increased strength. When they were used as the arms, as seen to the left, Ruination was in "Flight Mission" mode with the ability to fly. No special name nor power was suggested if one of the aerial units was an arm while the other was a leg, but this already reflects a remarkable amount of thought given to how rearranging a toy's parts might affect its character's abilities, and I would like to see more of this in Transformers fiction.
Posted by Mark Baker-Wright at 7:00 AM