I confess that I was a little bit surprised to see that more than 50% of those who responded to my poll last week asked to have the God Ginrai reissue featured, but I suppose I shouldn't have been. As my brother pointed out, it was the only Generation One option available. This toy was originally made available in the United States in 1988 as Powermaster Optimus Prime. The Japanese version of the toy, for some reason, doesn't even represent the same character, despite the toy's obvious resemblance to Optimus Prime. Their version of the fiction has a convoluted explanation for the resemblance, but I'll leave that for the Wiki article. Despite the fact that the toy pictured here is the 2002 Japanese reissue, I'll for the most part refer to this toy as "Optimus Prime," using the 1988 American version as default. 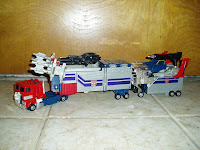 The basic vehicle mode is a tractor trailer, similar to the original Optimus Prime, with a bit more weaponry added on. The 1988 American version of Powermaster Optimus Prime does, however, have several differences from the Japanese God Ginrai. Most obvious here is the Japanese-exclusive (at the time) second trailer behind the first one. I'll say more about that later. Less obvious is the fact that the Japanese versions of this toy have shorter smokestacks than the 1988 American version (a reversal from what normally happens: American toys getting shorter smokestacks due to safety regulations). 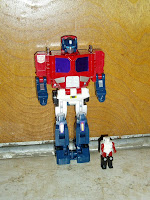 The cab transforms into the basic Optimus Prime robot, but this is where the "Powermaster" gimmick comes in. Like Headmasters and Targetmasters, Powermasters come with a small Nebulan figure. For Powermasters, the Nebulan turns into the engine (you can see it attached at the front of the vehicle mode above), and is necessary to unlock the transformation of the vehicle to robot form. In the 1988 American version, the Nebulan was named "Hi-Q." The Japanese "-Masters" followed a different storyline entirely, and these small robots weren't called Nebulans, and indeed weren't independent entities. Rather, the small robot was the "real" character, and controlled the larger Transformer body. The Japanese character's name was Ginrai. (And, just to make matters even more confusing, they weren't called "Powermasters" in Japan, either, but rather "Godmasters." I'm not sure if there's supposed to be some religious element to these characters, but I didn't come up with the name.) 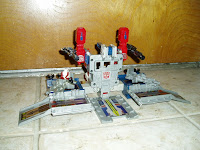 The main trailer transforms into a battle station, which can be used with other figures. Hi-Q fits rather nicely in the "seat" of one of the weapons in this mode, but due to the distinctive transformation Powermaster Nebulans have, definitely looks as though he's doing splits! Perhaps Hi-Q was a cheerleader in another life? ;) 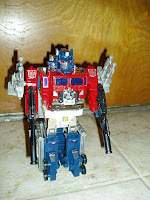 This trailer and the cab can combine to form a "Super" Optimus Prime (called "Super Ginrai" in Japan). The "Super Prime" head is just a separate part added on, apparently due to a late decision made in the planning process, whereby Prime was also going to be a Headmaster, in addition to being a Powermaster. I'm sorry that this intention was never fully developed. This mode provides an example of another difference between the 1988 American version and the Japanese versions, as the cab was made with die cast metal in Japan and had real "windows," whereas the 1988 American version used plastic and stickers. 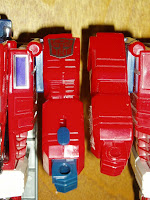 Yet another difference between the 1988 American version and the Japanese versions was that the Japanese versions have these nice slide-out fists in this mode. Here's a picture alongside an old 1988 American version to see what I'm talking about. The fact that the American version had those non-sliding fists meant that the fists were obviously visible in battle station mode. Perhaps this is one of the reasons why so many fans are convinced that Japan always gets the better toys (Transformers fans are always complaining about this. Especially when a given Optimus Prime toy in America gets shorter smokestacks. This is why it's worth emphasizing that the original American toy actually got the longer smokestacks in this instance!). 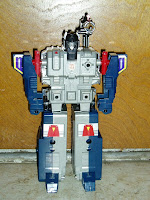 Anyway, that was entirety of this toy in America for many, many years, until this reissue was also made available in the States as "Powermaster Optimus Prime with Apex Armor" in 2003. The 2003 American reissue is, for all intents and purposes, identical to the Japanese reissue pictured here. However, even back in 1988, the Japanese version had an addition to this set called "Godbomber." Godbomber is that extra trailer I mentioned at the beginning. Basically, you can take that trailer apart, then reconfigure the parts to form this robot. It's not really a "Transformer" in the conventional sense, since there's no folding up of still-connected parts involved. Rather, it's a disassemble-and-reassemble process, as was the case with Metroplex's "Sixgun" robot. The American reissue called this robot "Apex Bomber." 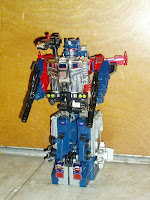 If you take Godbomber apart yet again, you can reassemble the parts on top of Optimus Prime's "Super" mode to make an even more powerful (presumably) robot. This is the "Apex Armor" mentioned in the American reissue, which was called "God Ginrai" in Japan. Now fully armored up, Optimus Prime stands ready to take on all threats!
Posted by Mark Baker-Wright at 12:00 AM