Pepsi is the Right of All Sentient Beings: Pepsi Optimus Prime

Although I still haven't heard of anyone having won it from the Transform Your Summer promotion, I'm happy to say that I received Pepsi Prime in the mail yesterday, having ordered it via the Hasbro Toy Shop (and having taken advantage of a 15% reduction offered by my local AAA! Membership does have its privileges!). 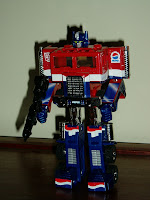 Of course, this is basically just a redecorated version of the original Optimus Prime from the 1980's. But having (oddly enough) never picked up the original back in the day, nor having ever gotten either the G2 version nor the 2002 TRU reissue (Of course, from the G1 era alone, I do have the Powermaster, the Action Master, and a smaller Japanese-exclusive "junior" version, but those are all different molds), it seemed worth picking up. 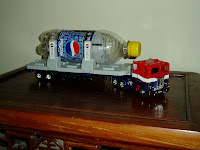 The trailer, of course, is new (or at least, it was when this concept was created for the Japanese market a few years ago. It's really only "new" in the sense that it hasn't been available in the US until now). It didn't come with that Pepsi bottle I have on top, but as you can see, it was designed to be able to carry one. It's also designed to fit 3 12-ounce cans on it, should you wish to place them there. Should make for an interesting conversation piece at parties!

One of the "problems" that plagued nearly all of the original G1 Transformers was that you couldn't always find a place to put all the parts when the toy was transformed into one mode or the other. In the case of Optimus Prime, there was no place to properly store his weapon when in vehicle mode. Sure, you could stash his gun in the trailer, but it would still rattle around loose. Likewise, you were intended to place Prime's fists in the chest compartment while in vehicle mode, but again, they'd just rattle around in there. But, fear not, Pepsi Prime owner! This new trailer has places underneath where you can store your spare parts, as indicated in the picture below. 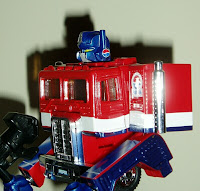 In robot mode, Prime is a walking Pepsi billboard. This guy's got Pepsi decorations in places I didn't expect. They even went to the trouble to put little Pepsi logos on the sides of Prime's head! But that's not to say that the deco doesn't work. It's really only a minor modification from the original Optimus Prime red and blue color scheme. In fact, now that technology has advanced to the point of being able to use tampographs for most details rather than stickers (they do still give you two stickers to put on Prime's forearms), the overall effect is much cleaner than the original.

I'd definitely recommend this toy to anyone who's a Transformers collector.
Posted by Mark Baker-Wright at 6:45 AM