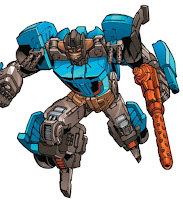 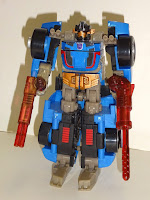 Slicer, for those unfamiliar with the character, started life as an Action Master exclusive to European markets while the line was suffering a temporary state of non-existence in the United States in the early 1990s. It recolored the Action Master version of Wheeljack (which I really ought to get around to featuring someday) in bright blue with pink highlights, very much a deco choice of its era. The BotCon version utilizes the mold of Energon Downshift, already more than half a decade old at the time, but long understood to resemble Wheeljack very closely, making it an obvious choice for a Slicer exclusive simply awaiting an appropriate opportunity to be made. That opportunity came with the so-called "Generation 2: Redux" theme of BotCon 2010, even though Slicer (like many of the characters featured that year) was technically not a Generation 2 character.

Since a "Shattered Glass" Wheeljack, in Slicer's color scheme, had already been depicted using Energon Downshift's design in prose stories created by Fun Publications for the Transformers Collectors' Club, and since Energon Downshift had a molded-in Autobot symbol in robot mode (visible in this picture), one might properly have expected Fun Publications to release this toy as "Shattered Glass" Wheeljack instead, but instead they tried to "have it both ways" by putting giant Decepticon symbols on Slicer's vehicle mode and coloring the molded-in symbol purple. I'm not a fan of this decision, as I think that rather than allowing the toy to be either character, it makes it so that the toy can't feature either character effectively. Thus, when I got my specimen, I immediately put an appropriate-sized Decepticon symbol sticker over the Autobot symbol in robot mode. I was tempted to sand the Autobot symbol down entirely to ensure a flat surface for the sticker, but ultimately decided not to damage my rare toy. 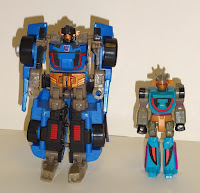 It should be noted for accuracy's sake that, when this toy was released at BotCon 2010, the toy's name was technically "Decepticon Slice," featuring both the added faction name and a variation on the original word for trademarking purposes. Other than the profile card that came with the toy, I don't think that the name "Slice" has ever been used since. In all other fictional appearances, this character is "Slicer," in keeping with the original Action Master, and that's how I will always think of this toy.
Posted by Mark Baker-Wright at 9:00 AM