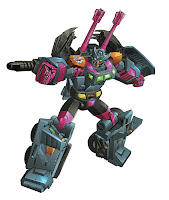 It's hard to believe that BotCon 2011 is less than a month away!  This seems like a good time to write about some of last year's exclusives (Shouldn't be too hard, as I've only managed to work in G2 Breakdown so far).  The theme for the 2010 BotCon set was, officially, "Generation 2: Redux," but that's mostly because saying "Late Generation 1/European Exclusives/Generation 2/and-a-smattering-of-Robots-in-Disguise: Redux" really doesn't flow very smoothly.

At least part of the reason for the hodgepodge is represented in Clench, here.  The original Clench was released in the European market before the "Generation 2" name was yet being used on Transformers packaging.  However, the distinctive G2 faction symbols were already in place.  Yet, the original Clench toy is in a very real sense a "true" Generation Two toy.  Or, at least, a toy physically identical to Clench in every way was released the following year under the Generation Two banner, but with the name "Colossus."

Although BotCon Clench is--like all BotCon toys--a repaint of a previously existing toy (Universe Onslaught in this case), the original is homaged in several obvious ways.  The new head is unmistakable, as is the color scheme.  The folks who wrote the Tech Specs that came with the toy really went the extra mile, though, in giving Clench weapons called "Colossus Cannons."

While we're still in the pre-convention speculation period that precedes every BotCon, whereby fans try to figure out what toys will be used for which characters at the next convention, it's worth noting a joke that the people at Fun Publications pulled on the Transformers fanbase shortly before Clench's identity as an Onslaught repaint was officially announced.  Recognizing that some fans had figured out how to guess at the URLs that led directly to the image files for some toys before the links had been officially announced, the Fun Publications team uploaded this image to the URL that would have applied to Onslaught, suggesting that Clench was to be a repaint of the similarly-recent "Tankor" figure (better known as Octane).  It wasn't long before the joke was revealed for what it was, but fans still had plenty of time to throw a fit that the Tankor figure (believed by many to one of the worst figures to come out that year) would be used for this exclusive.
Posted by Mark Baker-Wright at 12:00 AM