During the nomination period for the recent "Transformers Hall of Fame," I posted the banner to the left in an attempt in inject some humor into the proceedings.

Seriously, if I had to say which comment I heard more often than any other while at BotCon this past month, it would easily be "I'll bet you're thrilled that they did Action Master Thundercracker!" And, truth be told, I am. As long-time readers will no doubt already be aware, at this point a year ago I really didn't think it was possible that Fun Publications would do this toy at all, having gotten so close to doing the toy in 2010 and then being unable to get it made. I even dismissed the possibility of it coming out at the 2011 BotCon entirely, as being too soon after the 2010 effort. I'm glad to say that I was wrong, and hereby extend my apologies to Fun Publications for any anger and frustration directed at them during this campaign. 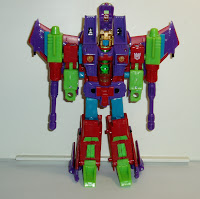 I know, if one wants to get technical (and one of my allies in the "Make it Happen" campaign has already pointed it out), this isn't actually "Action Master" Thundercracker, but rather "Shattered Glass" Thundercracker. Besides the information on the Tech Specs specifying this, you can tell because the faction symbol on the toy's shoulder is red, rather than purple. Personally, I don't think it matters much, especially since the shoulder itself is reddish enough that the color of the symbol blends in, and thus you really only see the outline of the symbol, making it a fair swap if you want to imagine this is a non-Shattered Glass figure.

Although a few fans have suggested that I helped to get this toy made, I'm not at all confident that I can actually take credit. It's not just that I hardly acted alone (thanks to the others who spread the word asking for this toy!), but that the timing is such that the question of whether or not this would have happened anyway is an obvious one.  Even so, there's no question but that I consider the release of this toy a bit of a victory. Of all of the BotCon 2011 exclusive toys, this is the one that I'll never, ever sell.
Posted by Mark Baker-Wright at 7:30 AM