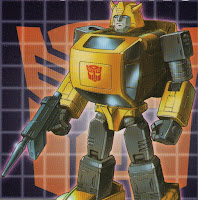 In just another couple of weeks, the Bumblebee live-action movie will hit theaters. While I'm going to wait for reviews before committing to see it, myself, now seems an appropriate time to feature the definitive version of the original Bumblebee character, in the form of Masterpiece Bumble (as the character is called in Japan, and I do indeed have the Japanese version). 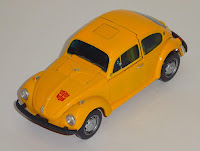 For many years, fans expected that a Masterpiece version of Bumblebee could never exist, because while the Masterpiece line has tended to feature realistic versions of classic character vehicle molds, fully licensed by the original vehicle manufacturer, the company that owns Volkswagen has long been understood to have had a prohibition against approving anything they consider "warlike." I actually don't know when they relaxed that ban, or if in fact fans merely misunderstood Volkswagen's position, but the ban clearly isn't so complete these days as it was once considered to be, and fans can not only own this toy, but quite a few VW Beetle versions of movie-Bumblebee are available in stores today.

Bumblebee's transformation is obviously more complex than that of his original toy, but still not too difficult, and it certainly resembles the character's animation model. Like many Masterpiece toys, this one comes with an alternate face you can use, but I somehow managed to lose mine (and the side mirrors you have to add on in vehicle mode) between my starting this blog entry and taking these pictures. Sorry about that! 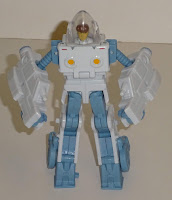 Because Bumblebee is a smaller character (and thus, a smaller Masterpiece toy), the folks at Takara added an extra character to this set (thus enabling it to be sold at roughly the same price as other Masterpiece toys of the time), but there is some confusion about exactly who this character is. Official lineart in the Masterpiece guide says that this toy is Daniel, and I consider the head to unmistakably be that of a young child (despite the admitted lack of fine detail), but the back of the box gives the name of Daniel's father, Spike (who was admittedly far more connected to Bumblebee), and the Hasbro release follows this lead.

Daniel (or Spike, if you prefer) comes costumed in an "exosuit" which, itself, can transform into a wheeled vehicle mode (as first seen in The Transformers: The Movie). It's a fun little extra, especially if you're a fan of this era of the original cartoon, but there's really no mistaking that Bumblebee is the star of this set. Indeed, since the character's return to prominence in 2006 (after several years where Hasbro had apparently lost the rights to the name), Bumblebee has become one of the most important characters in the entire Transformers franchise. It's really no surprise that he's finally getting a live-action film dedicated specifically to him. I only hope this one does him better justice than previous live-action installments.
Posted by Mark Baker-Wright at 9:00 AM