At first glance, the Titans Return line is a revisitation of the Headmasters concept, first introduced in 1987. Robots with detachable heads, with the heads themselves transforming into little robots. Also like the Headmasters of old, Titans Return's transforming head partners were compatible with every other toy with the same feature in the line. But while the Titans Return line did indeed feature new toys for each of the classic 1987 Headmasters characters (except for Scorponok, [grumble, grumble...]), they went way beyond those characters, making many classic characters "Headmasters" (although they called them "Titan Masters," now) for the first time. 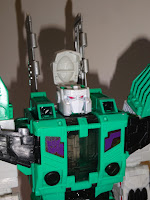 Six Shot (originally parsed "Sixshot" in Generation One, but they made it two words on this release) was never originally a Headmaster, but he did make his only G1 cartoon appearances in Headmasters-related media (the 3-part "The Rebirth" in the US, and the Japanese series, The Headmasters, which took its place overseas), so including him in this line really isn't much of a stretch. Since Six Shot was a Leader-class toy, and thus larger than many smaller toys that also used "Titan Master" heads, Hasbro fudged a bit on scale by making the "Titan Master" fit inside what essentially amounts to a helmet. Flip open the top of the helmet, and the inner-portion of the head comes off and transforms into a little robot that Hasbro elected to call "Revolver" (click on the link for an image of Revolver), whose name references one of G1 Sixshot's alternate modes (more on that in a bit). There's more I could say about Revolver, but I'll just refer you to the TFWiki entry on him in the interests of time. 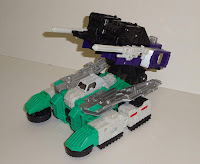 As his name is intended to reference, one of Six Shot's most significant features is that he features six alternate modes. This may not seem so significant these days, after Transformers featuring as many as ten alternate modes have been known to exist for almost two decades now, but Generation One Sixshot was the first Transformer to feature more than three distinct official modes (itself a rarity). Titans Return Six Shot is, in many ways, the exact same toy as Generation One Sixshot, only with a bit more articulation and the "Titan Master" gimmick added. In fact, you can achieve every one of Six Shot's six modes without ever detaching the "Titan Master" head (a rarity in Headmaster-type toys). The main robot mode is perhaps the most obvious, but let's look at the others... The tank mode is featured here to the right. 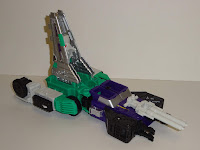 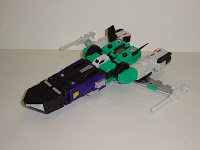 Here we see the jet on the left, and the submarine on the right. The submarine is the only significant departure from Generation One Sixshot, which instead had a gun mode. It has long been understood that gun-mode Transformers are something that Hasbro shies away from, even when doing classic characters known to have such modes. Hasbro nonetheless homaged the gun mode with Revolver's name. It must be noted that calling this mode a "submarine" seems rather strange, seeing as how this mode bears little resemblance to any known form of submarine. I wonder if turning the toy upside-down would make things any better.... ;) 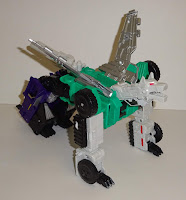 The final two modes are the car (seen here on the left with Revolver in one of the many spaces designed to interact with "Titan Master" robots) and the winged wolf (seen here on the right). The wolf is one mode that I actually think looked better on the Generation One version. Instead of just having a wolf head flip out, as on the original, the Titans Return version gave the wolf a weirdly-long neck. While this piece does add extra stability to the "tower" in the submarine mode (which can admittedly be useful if holding that mode upside-down), I'm just not sure if the addition was helpful enough to warrant sacrificing the appearance of the wolf. Ahh, well. It is what it is.

Of course, any Transformer with so many alternate modes inevitably sacrifices the appearance of at least one, if indeed not all, of those modes. Acknowledging that limitation, I still think that Six Shot is a pretty impressive toy, and a worthy addition to any collection.
Posted by Mark Baker-Wright at 9:00 AM