Last week, I discussed the history of the Target exclusive Universe homages to the classic Constructicons. This week, let's talk more about these versions themselves. Since these toys started out from molds created for rather different characters (working for the opposite faction!) in an entirely different line, it's perhaps understandable that although the homage is clear, it isn't exact. Only three of the four toys: Scavenger, Bonecrusher, and Long Haul--were actually given names that once belonged to Generation One Constructicons. 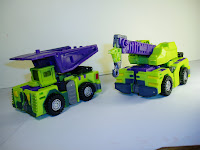 Given the crane vehicle mode of the toy on the right, one would have expected it to be called "Hook" if the same theme were followed, but the character is instead called "Hightower" (Ironically, the exact same name as the Robots in Diguise character who was an Autobot. The better to confuse you with!). This is clearly yet another case where Hasbro has lost the trademark. Usually, with a name that's also a commonly used word like "hook," they can just slap "Decepticon" (or "Constructicon"?) in front of the name and make it okay, but Hasbro has never done so for any of the Hook-like homages done in the past decade. One assumes that some other company has a toy using Hook's name, as the existence of such a conflicting toy would prevent such an easy patch. However, I have to admit that I'm not aware of any off the top of my head (are there any "Captain Hook" toys out there at the moment? Perhaps we have Disney to blame!). 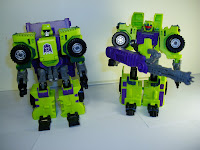 I don't know what Hasbro was thinking when they decided how to position Long Haul's faction symbol (as seen here on the left). This is not a mistransformation! The symbol really is upside-down! Sometimes, this kind of thing happens so that the symbol looks correct in the other mode, but the symbol is practically concealed in Long Haul's dump truck vehicle mode by the bed, which hangs over it (as seen above), and wouldn't look demonstrably better even if you could see it more clearly. 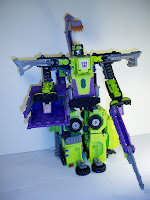 In keeping with the "Constructicon" homage, the team members combine to form a giant robot, who is in this case called "Constructicon Devastator." This image shows the most commonly used assembly, with Long Haul and Hightower as the legs and Scavenger as the arms. Bonecrusher becomes the torso and head. 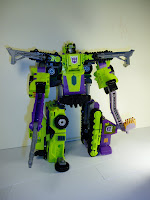 As I mentioned with Piranacon, combiner robots are occasionally designed with interchangeable limbs. Constructicon Devastator has interchangeable units, too, but with only four components, it's done a little differently. Bonecrusher always forms the torso and the head, but any of the other three team members can form both arms while the other two each become a leg. Here, for example, we see what Constructicon Devastator looks like if Long Haul becomes the arms. 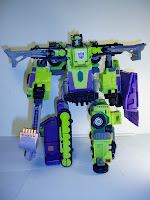 I've tried to be careful to call the individual team members Constructicon homages rather than "Constructicons." The reason for this is that these toys are never actually called "Constructicons" anywhere on their packaging or instructions. The word is only used as a trademark-protecting prefix to the name of the combined "Constructicon Devastator." Even so, the intention is clear enough.
Posted by Mark Baker-Wright at 12:00 AM