Some Transformer character names just get used a lot. I've already featured a couple of different Bumblebees, including another one from Generation Two. "Go-Bot" Bumblebee came out in 1995, near the end of the Generation Two line, and is the second (and final) Bumblebee to feature in that line.

The term "Go-Bot," itself, has a bit of a history. Back in the 1980s, "GoBots" were arguably the most successful competitors to the Transformers. Made by Tonka, GoBots were also largely drawn from a pre-existing Japanese line of transforming robots (in this case, "Machine Robo"), but were more uniform in size--most being roughly action-figure sized and sold on cards. By the time of the Generation Two line, it was clear that Hasbro was the winner of this competition, as they purchased Tonka in 1991 (although it's perhaps worth noting that the original Transformers line was itself in the process of dying out at that same time, leading to an almost two-year drought of Transformers toys in America before Generation Two began). Hasbro apparently wanted to make clear to the world that they now had the rights to the GoBots name and the characters (although not the molds themselves, which were retained by the original company in Japan), because even a couple of years before this toy, they had actually released a toy with the name "Gobots" in their color-changing subline. Then, in 1995, Hasbro released a line of small vehicles with free-spinning connected-axle wheels (purportedly at 1:64 scale, to be compatible with "Hot Wheels"-style racetracks) and called the subline "Go-Bots." (Note the slight variations in spelling for each distinct use of the term.)

The Cybertronian guide suggests that Go-Bot Bumblebee is supposed to be a Pontiac Firebird, but the TF Wiki generically calls it a "concept car," noting the exposed rear engine. Honestly, I wouldn't know one way or the other. The fact that many of the earliest Transformers actually did turn into vehicles that one could identify by make and manufacturer is a large part of the appeal for a lot of folks (nowadays, Hasbro's more careful to get licenses from the automakers if they do such a thing, which is why current Bumblebees don't turn into the Volkswagen Beetle form most readily identified with the character). I'm just not enough of a car aficionado to be able to tell the difference, myself. If it looks car-like, that's enough for me! 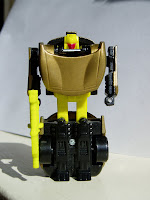 Not counting the very first Bumblebee mold (which was created for the pre-Transformers "Micro Change" line), this is actually the first mold not actually created to be Bumblebee that was assigned to the character. In fact, Go-Bot Bumblebee is a repaint of a character named "High Beam," and even uses the exact same package art, recolored to be a bit more appropriate to the recolored toy (although the art for both of these toys gives the robot the wrong hand weapon!). After the original wave of six Go-Bots, all other Go-Bots released before the end of Generation Two were repaints, and given names of classic characters. Even Megatron, previously always transforming into some kind of powerful weapon (when he transformed at all), was assigned a sports car mode! Presumably, this was done in an effort to boost lower-than-desired sales numbers for the Generation Two line. Unfortunately, it wasn't enough, and the line was canceled with several toys unreleased to make way for the new "Beast Wars" line. Although this was regrettable, it seems to have been a wise move, as the "Beast Wars" line was quite successful, and Transformers have never been absent from American toy shelves since!
Posted by Mark Baker-Wright at 12:00 AM