Celebrating the 25th Anniversary of the Transformers: Let's Talk About Ravage

Today is the 25th Anniversary of the release of the first issue of Marvel Comics' The Transformers. Although the concept of robots that change from one form to another had been around for a few years by this time, The Transformers introduced something entirely new: the idea that the robots themselves were sentient beings, as opposed to being controlled by some humanoid force. In recognition of this anniversary, bloggers across the Transformers fandom will be writing entries about Transformers today. 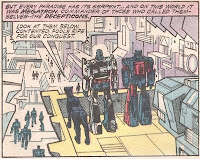 But I'm not looking to talk about Issue One today. Although it is the first time that any Transformers-branded product was made available to the general public, and deserves a thorough review, Jim Sorenson did an admirable job of that just a few months ago. Instead, I'm going to celebrate the 25th Anniversary by taking a look at the first Transformer character ever to be seen speaking in a Transformers comic book. Was it Optimus Prime, leader of the heroic Autobots? How about the evil Megatron? NO! The honor of speaking the very first lines ever printed in the Transformers mythos went to Ravage.

This is more than a little ironic, since Ravage was a jaguar, and not a humanoid robot like most other Transformers. In the 1980's cartoon, which is remembered far more readily by most people who grew up in the 1980's, most "animal" characters were treated as non-sapient, and thus Ravage never spoke in that medium (Just one more reason to prefer the comics!). 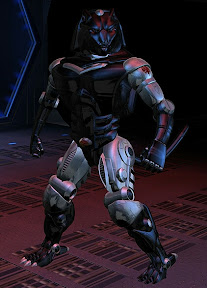 But whatever the medium, Ravage is clearly one of those characters that captured the imaginations of Transformers fans. His popularity was so great that he was one of only a small handful of Generation One characters to make an active appearance in the Beast Wars cartoon, in which he not only spoke, but had actually been reformatted into a humanoid form (which, oddly, retained the panther's head). 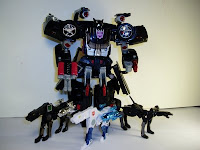 Ravage has been given a number of toys over the years, too. More than I can comfortably post images of here, so I'll have to make do with this partial group shot, and encourage you to check out this link from the TF Wiki. Note that this link only shows toys based on the Generation One character, and not homages. It's still quite the list!

Anyway, that's my contribution to today's 25th Anniversary. There are quite a few others, too, so be sure to check them out! (The original link no longer works, but this version of it on Archive.org gives some direction. Individual links may no longer work, of course) Regular Transformers toy features resume next Friday.