When I discussed Universe Skywarp, I mentioned that the original Universe line consisted entirely of repaints of previously released toys. In some cases, these toys went back as far as the late Generation One era. Because standards for what size of toy is sold at what price point have changed a bit from era to era, Hasbro occasionally bundled multiple Universe toys together to increase the perceived value and (hopefully!) generate more sales. This was the case with Soundwave and Space Case. 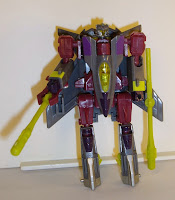 I'll start with Space Case, which is a repaint of the Generation Two Cyberjet of the same name. Like fellow Cyberjet Skyjack, Space Case comes with pressure-fired missiles and features decent articulation. The fact that Cyberjet articulation technology was so cutting-edge when the toys first came out helps disguise the fact that this mold was actually almost a decade old by the time Universe Space Case was released in 2004. Unlike Skyjack, Space Case actually has two hands (the missile launcher being attached to the right arm, rather than taking the place of the arm itself). 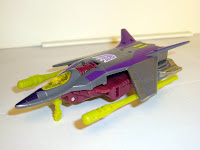 The tampographed faction symbol on Space Case's jet mode is a definite improvement over the Generation Two era, which was still in a transition between using stickers and deciding not to put faction symbols on toys at all (a lot of early G2 toys had outlines of symbols, often with the name of the faction alongside them, on hidden parts of the toy's surface, but these weren't present on Cyberjets). Some fans don't care much about the symbols, arguing that it detracts from the "Robots in Disguise" element. I'd much rather have them. The transformation aspect of Transformers has always been more about function and utility than "disguise" for me. But, I do have to admit, I'd rather have the symbol on the robot mode than on the vehicle mode, if only one symbol is used. So Space Case "fails" on that level....

Universe Soundwave's mold is even older, dating back to a 1993 toy named Stalker that was released in Europe, but never in America. The mold did see an American release in 1997 as part of the Machine Wars line. The original version's hand weapon and missiles were removed in order to satisfy American safety regulations, and it was at this time that the mold was first released as Soundwave. Although the mold wasn't created to be the Generation One character, it's a surprisingly good fit. The head retains the essential look of Soundwave's head with its face plate, and Stalker's function was "communications expert," rather similar to Soundwave's own function (this perhaps explains the small radar dish that is part of the mold). 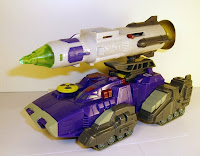 The Universe version of this toy still has all of the neutering of the Machine Wars release, and as a pre-Generation Two mold, it really doesn't have very good articulation. Basically, you can transform it from robot to vehicle and back, but don't expect to be able to pose it much in robot mode. Universe Soundwave also has a single tampographed faction symbol, which (like Space Case) the earlier American release seemed to lack (I don't actually own Machine Wars Soundwave). Unlike Space Case, this one shows up better in robot mode than in vehicle mode.
Posted by Mark Baker-Wright at 12:00 AM