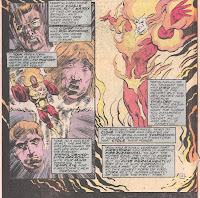 As I said last time, after the evolution of the "elemental" version of Firestorm, the still-amnesiac Martin Stein was truly separate from the composite superhero for the first time.

A kind of mental link remained. At first, this manifested itself simply as a series of dreams that Stein would have, "of somehow being Firestorm," although he did not understand the significance of these dreams. Stein also intuitively knew that this new Firestorm was somehow "wrong."

What was wrong was that Stein was intended to become Firestorm (as revealed by Maya, an Earth goddess who appeared to the elemental Firestorm), although this intention was thwarted from the very beginning by the inclusion of Ron Raymond and subsequent events. 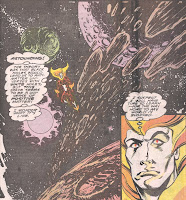 As the 80's-era Firestorm comic book ended its run with issue #100, this error was rectified, and Stein became the elemental Firestorm all on his own. Stein also got all of his memories back. This should have been a good thing, but in an act of saving the world, Stein's Firestorm was sucked through a black hole to end up in distant region of space with no apparent way back home.

And that was the state of things for the next several years. Although Stein was able to return to Earth once at the cost of switching places with the now-powerless Raymond, he spent most of his time out in the distant reaches of nowhere. By the time Stein returned to Earth more properly (as Raymond developed the ability to become a more traditional Firestorm on his own), he had lost a great deal of his perspective on the human race, and had an unfortunate habit of setting fire to large areas without realizing it. Raymond had to snap Stein back to reality on at least two separate occasions, and both times, Stein chose to return to his spacebound wanderings. 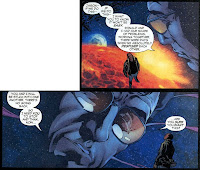 Finally, some 16 years (real time) after Stein first found himself in the far reaches of space, he met current Firestorm Jason Rusch, who had assumed Raymond's powers upon Raymond's death, and Rusch convinced Stein to return to his human life and assume the kind of advisory position Stein had with Raymond back in the beginning.

No sooner had Stein given up his godlike powers (in real time. In comics time, we're told that a year had passed) than we learn that he'd been kidnapped by an insane scientist. Rusch is eventually able to rescue him, but not before Stein had been tortured and actually killed (Rusch was able to revive Stein using Firestorm's powers). Then, a few months later, as that run of Firestorm was reaching its last issue, Stein was forcibly removed from the Firestorm composite by DC supervillain Darkseid. By the time we see Stein again, he has again been held hostage and tortured for quite some time.

In fact, this is where things get really confusing. Stein's fate is left ambiguous after the villain torturing Stein is defeated as part of the DC Countdown event. We don't really see him properly again. A confusing speech bubble implies that Stein is usurped by an OMAC. It is unclear if Stein is a part of the group of DC heroes that survive the OMAC invasion, and when we see Firestorm again, it is still the composite of Jason Rusch and another character. Stein may well be dead, but this was never explicitly spelled out, nor is where he is now if he did, in fact, survive.

But if Stein did survive, he could hardly be faulted if he chose not to reenter the world of Firestorm again. It's definitely caused him a lot of pain and anguish.