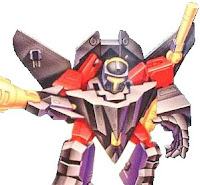 Some of the last all-new molds created for Generation Two were the Cyberjets. The Cyberjets were small, highly posable jet-form robots that came in one of three molds. Each mold was used twice during the Generation Two era. The first batch was a group of Decepticons, and the second batch were Autobots given Generation One names. Even though Generation Two Transformers weren't always given faction symbols on the toys themselves, it's easy to tell the Decepticon Cyberjets from the Autobots. The Decepticons all have red thighs and shoulders, while these same parts on the Autobots are blue. 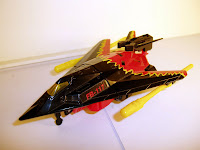 Skyjack turns into a stealth bomber. When I reviewed Dreadwing over a year ago, I commented that stealth bombers were apparently popular at the time. In that vein, it's worth noting that Skyjack's Tech Specs bio says that Dreadwing is his mentor, and that they apparently enjoy shooting at Earthen cars for target practice together. Since Skyjack, like most new-to-G2 characters, didn't get any American fiction written to feature them, it's nice to see even that small bit of personality offered in the character's bio. 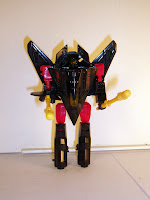 Skyjack's robot mode is one of those that only has one "real" hand, the other arm being devoted to holding and/or launching one of the two missiles that come with the toy (more on that in a bit). In this particular case, I don't mind the one-fist thing as much as I normally would. Perhaps it's because, when the missile isn't in place, the end looks "claw-like" enough to still serve as a potentially useful appendage. Before the Cyberjets, a Transformer that could move both arms, both legs, both elbows, both knees, and the head in a wide range of motion would be considered the exception. Nowadays, if a Transformer isn't at least a posable as a Cyberjet, fans complain (especially if the perception is that some gimmick or another was the cause of this liability). 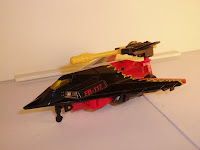 Besides featuring unusually high posability for the era, the Cyberjets all had missiles which could fit into a launcher. Unlike most Transformer missiles, which used spring-loaded launchers, these relied on nothing more than the plastic's own flexibility to work. Apply pressure to the end, and when enough force is applied to push the missile out of the small slot in which it's held in place, the missile will fly out! It's deceptively low-tech, but works rather well. And the design of the Cyberjets is such that these missiles are accessible and can be launched from both jet and robot modes.

Since Skyjack is a Generation Two toy, sharp-eyed readers may already be wondering why I haven't designated this as "Generation Two" Skyjack in the title, as I do for most non-Generation One toys. Even more observant readers may have already figured out the reason: this is the only Transformer ever called "Skyjack" in the entire history of the franchise. Although it is an appropriately "evil-sounding" name for a Decepticon to have, one assumes that after the ways in which the world has changed after the attacks on the World Trade Center and the Pentagon in 2001, a name like "Skyjack" just isn't one that Hasbro wants to mess with any more. I certainly don't blame them.
Posted by Mark Baker-Wright at 12:00 AM