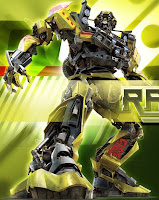 Over the past couple of years, a question I get a lot when people first discover that I like Transformers is "did you see the movie?" I then have to explain that, yes, I did see the movie... eventually. Since these folks are asking me now as opposed to, say, 5 years or more ago, I know they're asking me about the 2007 live-action Transformers rather than the 1986 animated movie, which I proudly went to see on the day that it opened (which happened to be my birthday, August 8th). For the live-action movie, I really didn't care all that much. I'd kept up on all the news, as I do for all things Transformers, but really hate the aesthetics of the robots they used. I usually call them "shrapnel-bots," which perhaps gives you an idea of what it is about the designs I dislike. 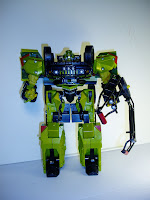 I fully intended to watch the movie... eventually, and did once it came out on DVD. I did purchase the DVD, but to this day, I've actually only watched it through once. The movie was okay, and I think it did what it was supposed to do: give moviegoers some mindless entertainment with an action- and explosion-filled summer flick. It also sold lots of toys, though not very many to me. Indeed, I fully intended to save some money and not buy any toys explicitly created for the movie. As this review attests, I didn't quite make it. The fact is, I'm a sucker for exclusives. This version of Ratchet (or "Autobot Ratchet," as Hasbro has to do for any toys named Ratchet these days to protect their trademark) was one of the first of what were called "Premium" releases, and was exclusive to Best Buy (the only time I can recall Best Buy doing such exclusives). Basically, what they did is re-release toys that had already been in stores for months, but in bright, shiny colors with a few more paint details than the original version. 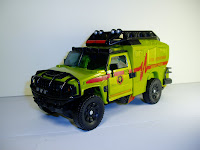 One feature of most movie toys that sets them apart from most other Transformers lines of recent years (with the obvious exception of the Alternators) is that they actually turn into vehicle forms licensed from real car companies, notably General Motors, which it seems is a company that movie director Michael Bay has a strong relationship with. Ratchet turns into a Hummer H2, modified for emergency response. Look closely, folks, because this is the only Hummer I'll ever own! ;) 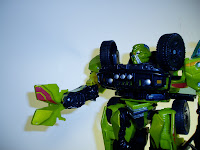 Ratchet has a couple of built-in gimmicks, such as the claws made from the roof rack seen above and the axe that can replace his right hand as seen here, but they're really not anything special. This is a toy that I actually tend to keep out of display and in a box (with the two or three other movie toys I ended up buying). If the toys coming out for this year's movie are essentially the same, I'll end up saving quite a bit of money this year, hopefully having learned from the mistake of going against my own original intention in regard to toys like this one.
Posted by Mark Baker-Wright at 12:00 AM