Back when I reviewed the 1996 McDonald's Happy Meal "Beetle" toy, I took some effort to say that this was the first time that McDonald's had done a Transformers-themed Happy Meal toy that actually transformed. Unfortunately, the words I chose to convey that fact were somewhat confusing, leading to a very appropriate comment that there had been, in fact, transforming Happy Meal toys previously: the Changeables. These weren't made by Hasbro, and thus aren't actually "Transformers," but they clearly represent an effort to capitalize on the transforming robot fad of the era. Although I have since rewritten the "Beetle" article to (hopefully) more accurately convey my original intention, the Changeables deserve a mention. Unfortunately, I had long ago lost, sold, or given away the Changeables I'd gotten during the '80s, and wouldn't have been able to provide photos without stealing them from another site somewhere (something I try to avoid when possible, although I won't claim that I have always kept to this ideal). 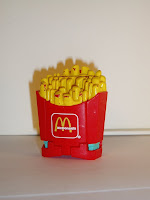 Thankfully, I found this member of the "Fry Force" (yes, Fry Force is the actual name this toy was given, although I can't actually tell if it's intended to reference a group of identical Fry-bots or if it's supposed to be the name of a singular entity. I'm just going with what makes the most sense to me) during a yard sale run recently, and it's a fairly decent representative of the Changeables line as a whole. Basically, what McDonald's did was release a set of transformable toys that changed from common food items (Large Fries, in this case) into robots. 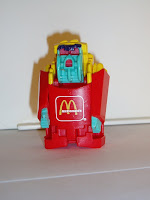 So far as I can tell, this toy came from the second series of Changeables, out in 1989, and is a repaint (see? McDonald's does them too!) of a toy from the original 1987 series. A third series, out in 1990, had food items that turned into dinosaurs. All of these toys have very simple transformations, and are fairly sturdy: very appropriate for toys for young children. I'm still deciding whether I should just leave the paint chipping on this one as it is, or if I should retouch it and make it look "new" again.
Posted by Mark Baker-Wright at 12:00 AM