At the end of last week's account, I mentioned how Professor Martin Stein's prognosis of less than a year to live, due to a brain tumor, was actually just the beginning of his troubles. I've already pointed out that Stein was always the passive part of the Firestorm persona, the active part being teenager Ronnie Raymond. This has always been a source of difficulty for Stein, as he was liable to be called into the Firestorm fusion without warning at any time (to some extent, Raymond had this potential difficulty, too, but Raymond initiated the fusion far more often than Stein did). Raymond's insistence on forming Firestorm against Stein's wishes, especially in an incident shortly after Stein learned of his medical situation, caused a serious rift between the two, as Stein experienced deep trauma at being used against his own will in this way. Although Raymond eventually apologized and agreed to allow Stein the freedom to reject becoming Firestorm if he so desired, it still took some time for Stein to be able to trust Raymond again, and at this point, Stein had not yet shared with Raymond the knowledge that he was dying. 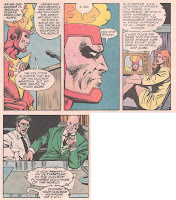 Once Raymond learned of Stein's condition, the two of them together decided to take the last few months of Stein's life and do something that Stein thought would be of lasting impact. Using Firestorm's powers to nullify a couple of nuclear missiles—one in the US and one aboard a Soviet submarine (remember, this was still the 1980's)—he/they demanded that all nations with such missiles disarm. Naturally, neither superpower took this ultimatum well, and both governments sought in their own way to destroy Firestorm. The Soviets sent a Russian nuclear superhuman to attack Firestorm, and when that didn't seem to work, the Americans tried to annihilate both of them by shooting a nuclear missile at them. When the missile went off, Firestorm survived, but was changed. Firestorm was now a fusion of Raymond and the Russian (a man named Mikhail Arkadin), but neither was in control. Now Firestorm seemed to have a mind of his own. Martin Stein was nowhere to be found, and was presumed dead.

About a year later (in real time, although it was apparently months later in comics time, as well), we learned that Stein was not killed in the nuclear explosion, and that it had in fact eliminated the tumor with its massive radiation, ironically saving his life. Unfortunately, the incident also left Stein with amnesia, and he no longer had any memory of his previous life. It was discovered at this time that it was Stein's mind that formed the template of the new Firestorm entity, but neither Firestorm nor Stein himself seemed to be aware of this, and when Firestorm was formed, Stein's body remained separate, going into a coma for the duration. This was not good for Stein's well-being; doctors mentioned that Stein's bodily functions deteriorated when these comas lasted for too long.

Less than a year later (again, in real time), Firestorm changed yet again, as Raymond and Arkadin gave up their individual identities entirely, and Firestorm evolved into a "Fire Elemental." Stein's mind was returned to his body when this evolution took place, and thus Stein was completely separate from Firestorm for the first time since Firestorm's creation....

Well, not quite. But I'll get to the troubles still awaiting Professor Martin Stein in next week's (final) installment.
Posted by Mark Baker-Wright at 12:00 AM