It's Halloween, but the most I'm going to make of any connection to this toy and that holiday is this fairly dark and ominous bit of packaging art. Let's face it. I've been doing this for a long time now, and there's really only so many ways to connect a new Transformer with each given holiday every year. Most years, I don't even try.

Whenever a new version of Starscream is released, there's a reliable section within the fandom that expects it to be recolored into (at least) Thundercracker and/or Skywarp. But while the so-called "Seekers" are probably the most well-known examples to what I'll call "automatic mold re-use expectation," there are certainly others. These days, almost as soon as a new Jazz mold comes out, the requests for a new Stepper toy are hardly ever far behind. 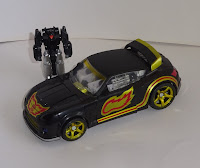 The original version of Stepper, as many fans know well, was created in 1987 for the Japanese Headmasters line by taking the original Jazz mold, giving it a black-and-gold palette swap, adding a Targetmaster partner (which in 1987 required an extra accessory to use, as they didn't change either the Jazz mold's fists, nor the handle in the Targetmaster weapon borrowed from Cyclonus, at all), and giving it a new name. Although the aftermarket price of that toy, once astronomical due to perceived rarity, plummeted upon the re-release of that mold in 2003/2004 (now with remolding in the Targetmaster's handle so that Stepper could hold his own Targetmaster weapon), the concept itself is still one that has many fans.

That said, despite a handful of new Jazz toys to come out over the years, there actually haven't been that many new Stepper toys to come out. The United toy, utilizing the Reveal the Shield Jazz mold, is to my knowledge, only the second of three "black-and-gold Jazz"-type Stepper toys ever to be made.* Like its original predecessor, United Stepper was a Japanese exclusive, but whereas the original Stepper was sold at standard retail in Japan, United Stepper was created as part of a promotion with Japanese publisher Million. If you bought the appropriate book, you could get Stepper through the mail. I actually don't know how many people actually got their Stepper in this way. I got mine through one of the many online shops, and at a fairly significant discount, at that. 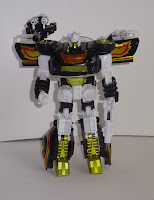 This version, like the original, achieves making a Jazz mold into a Targetmaster by borrowing a Targetmaster weapon (called "Nebulon" again for this release) originally created for a Targetmaster Cyclonus figure. Unlike with the original Stepper, no remolding nor extra added parts were required to make the Targetmaster weapon compatible with the larger robot. Stepper can hold Nebulon in his hands just fine if he wants to, and someone figured out a way to utilize the speakers that were created for the original Jazz version of this mold to emulate the original Stepper's over-the-shoulder Targetmaster mount. Truly an attractive look for an attractive figure. I recommend getting it if you have a chance.
*Note that I'm not counting Alternators Ricochet, which does use the traditional Stepper color scheme, but is not a recolor of a Jazz figure.
Posted by Mark Baker-Wright at 9:00 AM