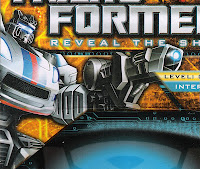 A couple of weeks ago, I featured a toy from the Reveal the Shield line without really getting into what the Reveal the Shield line was all about. There's really not much to tell. Reveal the Shield was something of a filler line between the line dedicated to toys related to the second live-action Transformers film and the then-still-upcoming line dedicated to the third. Its main gimmick was a return to using heat-sensitive rubsigns such as had been used back in Generation One and a few times since. This time, instead of being some kind of mark of "authenticity," the nominal idea was that you didn't know what faction the character was aligned with until you rubbed the heat-sensitive sticker revealing the faction symbol.

Yes, this was arguably the worst-kept secret of all time.

Even if the vast majority of toys in Reveal the Shield weren't homages to well-known Generation One characters, the packaging itself tended to give away the secret. Unambiguous faction symbols would still be visible just above the picture of the figure on the back, and often the character's bio would make mention of the character's allegiance. Jazz is a particularly egregious example. It has long been understood that the word "Jazz" is too common for Hasbro to easily defend as a trademark, and so they have taken to adding the word "Autobot" to such names for many toys in the recent past. They started to do better here, using "Special Ops Jazz" as the official name of this Reveal the Shield toy, but the bio on the back of the package gives away the game with the very first words... "Autobot Jazz." 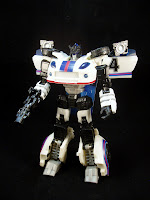 As a modern toy for a classic Generation One character, Jazz is one of the better specimens out there. Not only are the vehicle (above) and robot modes unmistakably Jazz, but the designers tossed in a couple of "speaker" accessories that evoke the character's famous love of human music amazingly well. These can be deployed either in robot mode (as seen here) or in vehicle mode. When fans pleaded years ago for the classic toys to be re-released with modern toy-making techniques, this is the kind of thing they were asking for! 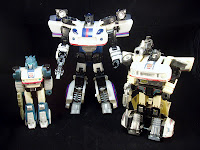 Unlike Windcharger, Reveal the Shield Jazz did see a normal retail release. But that didn't last long, as most of the Reveal the Shield line fell victim to the same aversion to restocking that caused Windcharger to be relegated to the discount stores. If you didn't pick up Jazz pretty quickly at the end of 2010, you probably had to go a Ross or similar place to find him several months later. However, this does mean that there is still an outside chance that you might be able to find this toy at such stores even now. If you can, I totally recommend picking it up if you haven't already. Jazz was worth the price that Target would have charged, but you'll actually be paying several dollars less than that if you can snag it at one of the discount chains. Happy hunting!
Posted by Mark Baker-Wright at 12:00 PM