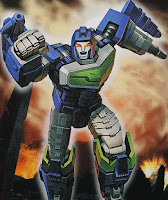 When Fun Publications was planning its final BotCon in 2016, Hasbro approached them with the request to use some of these pre-planned toolings as exclusives that year. This is different than the usual situation, in which Fun Publications themselves create new heads (and occasionally other parts) to achieve the character they wish to produce. These are toolings new to the general public that Hasbro had created, but which they now had no plans to actually use otherwise. In the case of Reflector, Hasbro had created Combiner Wars Shockwave with tooling for Reflector's head (as depicted in the 80s cartoon), but with Combiner Wars winding down, now had no plans to use that head, and so they asked if Fun Publications might use it instead. This became the "troop builder" for that convention, as Reflector has traditionally been three robots hanging out together.

Being a BotCon exclusive set, these toys probably use a greater number of paint applications than Hasbro would have ever done, had they released this tooling at retail, and this new color scheme definitely does a remarkable job of making the Shockwave mold look like Reflector (or, at least, like the "Viewfinder" component of the original toy. This set follows the cartoon's pattern of having all three Reflector components look like Viewfinder, plus or minus a lens on its chest). However, Shockwave's distinctive gun-hand remains. Also, no effort was made to give Reflector a new alternate mode, and so each robot still transforms into a large weapon (although I did make the slight transformation change here not to flip down the handle, so it's easier to imagine these as some kind of spaceship with a massive gun barrel up front).

But everyone knows (if they know of Reflector at all) that Reflector is supposed to turn into a camera, and Hasbro actively encouraged fans at BotCon to combine the three Reflector toys into a camera form. Since the mold wasn't actually designed with this mode in mind, there is no definitive way to accomplish this, and each option has its own benefits and drawbacks. Here are just a couple of the better camera modes I've seen online, reproduced with my own set.