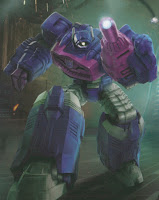 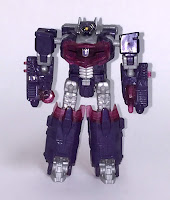 As most fans and long-time readers know, the original Shockwave turned into a "space gun" sized perfectly to fit a child's hands. As is perhaps equally well-known, such weapon designs are out of vogue among toymakers today. Thus, Shockwave (like Megatron before him) is frequently updated with new designs that bear little resemblance to the original toy's alternate mode. Combiner Wars defies that trend by actually giving Shockwave a weapon mode again, but at a cost.... 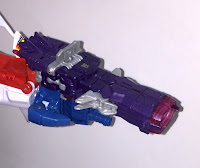 Whereas the original Shockwave was one of the larger toys of its time, Combiner Wars Shockwave is actually one of the smallest toys of the Combiner Wars line. The idea here is that, although Shockwave can no longer become a play weapon for children's hands, he is now perfectly sized to fit into the hands of one of the combiners from which the Combiner Wars line gets its name. Ideally, this should be Bruticus, so as to pay homage to a scene from the classic episode "The Revenge of Bruticus," but I didn't have Bruticus handy when I was taking these shots, so I extend my apologies.
Posted by Mark Baker-Wright at 9:00 AM