In the previous entry, I detailed multi-millionaire industrialist G.B. Blackrock's first encounters with the Transformers in issues #5 and #6 of the original Marvel Comics Transformers series, as the Decepticons attacked and captured a new oil drilling platform built by his company. Another casualty of the attack was one of Blackrock's employees, Josie Beller, who was left paralyzed. Although Blackrock is only seen in cameo appearances in issues #7 and #8 as he visits Beller in the hospital, it is clear that both are planning to fight back.

In Beller's case, this means using Blackrock's resources (freely given to her disposal by her guilt-stricken employer) to create an exo-skeleton that not only duplicates the functions of her nervous system, restoring her mobility, but grants her electrical powers which she plans to use to destroy the robots that crippled her. Thus, Josie Beller becomes "Circuit Breaker."

Blackrock has his own ideas of fighting against the robots who have attacked him and his company and, unaware of Beller's intentions, develops a superweapon designed to destroy them. But before he can unveil this weapon to the public, two important things happen. First, Beller offers her services as Circuit Breaker to help Blackrock destroy the alien robots, an offer Blackrock declines out of concern that Beller not place herself in harm's way again. Second, Blackrock is approached by the Autobots (recently restored to function through the efforts of Ratchet and the newly-awakened Dinobots) with an offer of protection from the Decepticons in exchange for fuel. Blackrock agrees to the Autobots' terms, and Jazz and Wheeljack accompany Blackrock to the unveiling of his superweapon.

We never get the chance to see whether the superweapon would have been effective against the Transformers, as Beller sabotages it in an effort to pressure Blackrock into announcing her as his planned anti-robot weapon. Before he can decide whether or not to do so, the scene is interrupted by a Decepticon attack, whereby Circuit Breaker not only demonstrates her effectiveness against the Decepticons, but against all Transformers, severely complicating the Autobots' efforts to protect Blackrock and the other humans present. 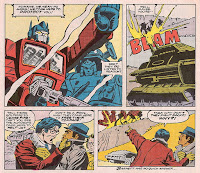 This sets up a theme that follows Blackrock through the rest of the series. As arguably the Autobots' staunchest human ally (with apologies to the Witwicky clan), Blackrock attempts to help his fellow Earthlings to understand that not all Transformers are evil. Once in a while, such as with the G.I. Joe team in the original G.I. Joe and the Transformers mini-series, Blackrock finds a receptive audience. But in other instances, such as with the U.S. Government in issue #15, Blackrock's advice goes unheeded, making things difficult for the Autobots. 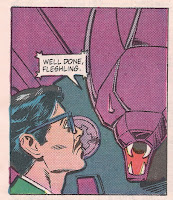 Although, with the Autobots' help, Blackrock was indeed able to recover the properties stolen from his company by the Decepticons, he finds himself the victim of a Decepticon scheme once more in issue #31. This time, he is attacked personally, as a Decepticon device hypnotizes him into building and promoting a series of "Wash and Roll" car washes, which themselves are designed to hypnotize humans into driving their recently-refueled cars to a Blackrock Enterprises facility (which, of course, is being run by the Decepticons). The fuel is then siphoned out of the cars, and the humans return home with half-empty gas tanks. Although the scheme is thwarted, and Blackrock is freed from the hypnotic influence, I can only assume that this incident was a bit of a setback for Blackrock's company, although he deserves credit for his promise to donate money gained from the stolen fuel to aid the poor of the local area.

After this, G.B. Blackrock isn't seen again for a few years, but when he resurfaces, he's still doing his part to fight the Decepticons. I'll deal with that more fully in a few more days.
Posted by Mark Baker-Wright at 12:00 AM