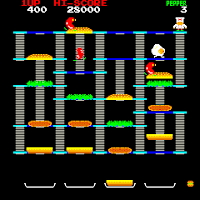 Although I was only 8 years old at the time, I nonetheless have always thought that 1982 was a pretty good year. Besides being the summer I lived in Walnut Creek, which I've always considered an important part of my childhood story, I later began to notice that a great many things I enjoyed had origins in that specific year. Sitcoms such as Cheers, Family Ties, and Silver Spoons all started that year. Michael Jackson's Thriller was released and Madonna made her debut. I've also discovered, in the years since, that several of the video games that I still remember fondly dated back to 1982. Admittedly, some of the most significant games—Pac-Man and Donkey Kong, for example—had already been introduced by that time (in 1980 and 1981, respectively), but by 1982, the golden age of video games was well underway (Professional video game referee Walter Day of Twin Galaxies actually says 1982 marks the start of the golden age, citing the date of a TIME magazine cover story. I don't go quite that far, but it's worth pointing out). To commemorate the 30th anniversary of some of these important video games, I'm going to feature a different one each month.

BurgerTime was an odd concept by almost any standard. You don't have to be a vegetarian to wonder about the hygienic rigor of a chef who walks over the individual parts of each hamburger so that they will fall into the appropriate trays to be served at the bottom of the screen. You don't have to be Sigmund Freud to wonder what's going on in the head of someone who is being chased by human-sized food items (which, perhaps ironically, aren't all traditional hamburger items, although there is a pickle monster that tends to show up only on later boards). Obviously, this is not a game that attempts to be realistic.

Still, it's hard to deny that the game is fun. The mazes are challenging enough to force a player to plan out his/her movements very carefully, lest the Peter Pepper character be maneuvered into a corner from which there is no escape while trying to trigger that last hamburger patty to fall below. Also, points are scored in such a way to incentivize waiting until the last moment to move, so that Peter can trap a food monster either on top of a falling hamburger part (which also forces the part to fall even further toward the trays below, potentially saving time, as well) or below (so it will be crushed under the part's weight—again, try not to think too hard about the foreign food items finding their way into the resulting hamburgers). And the addition of just a few shakes of pepper—which will not only stun food monsters, but also render them harmless to walk through, if only for a few seconds—adds yet another dimension to game play. But use those pepper shakes wisely, or you'll find your pepper shaker empty at a crucial moment!

BurgerTime was released by a company named Data East, which actually weathered the decline of the video arcade game industry of a few years later (as home video games began to gain dominance, recovering from a home console industry crash in 1983) better than most, but which sadly went out of business in 2003. Fortunately for BurgerTime fans, DataEast's intellectual properties were purchased by another company (albeit one I admit I'd never heard of prior to working on this article), and so BurgerTime-related games are still being released for various modern game systems to this day.
I'm admittedly starting this year-long feature a little late, and thus have already missed January. For "January's entry," I'll refer you to the bit I wrote a few years back on Pengo, which was indeed released in 1982.
Posted by Mark Baker-Wright at 12:00 AM