A Brief History of G.B. Blackrock - Part One

OK. So we've been told that the old Marvel Transformers comic continuity is being picked up again, starting with a Free Comic Book Day issue in May. The good folks at Comic Book Resources have released a preview that gives us a little more information. Obviously, this has generated some speculation about just what lies in store, and I've been following all of that with interest. But what really caught my attention was the fact that G.B. Blackrock was one of the characters "we can expect" to see featured in the new stories. Having used that name as my main Transformers-forum alias for many years now, and having gone to the trouble to create a custom figure of the character, Blackrock is obviously a character I'm pleased to see again. So, for the benefit of those who only know of Blackrock from the occasional mention of his name here on the blog, it's time to fill in Blackrock's story. 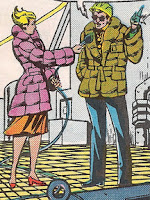 When we first see Blackrock in Transformers #5 (the first issue of the series as a full-fledged ongoing series, after the four issue limited series that introduced the franchise to the world), we don't actually "meet" him directly, but rather we catch him during an interview on a television broadcast being monitored by Shockwave, who defeated the Autobots in the surprise ending to the limited series a couple of months previously, and who is now consolidating his leadership of the Decepticons as the strongest of the few Transformers still functioning. Blackrock, introduced to the television audience as "the flamboyant multi-millionaire industrialist," is the owner of a large corporation that is about to open a new oil-drilling platform, and Shockwave is making plans to seize this facility for the Decepticons.

As it happens, this is simply the start of a fairly major story arc involving Blackrock. In the next issue, Shockwave attacks, and despite a fairly impressive array of self-defense weaponry that might be out of place on a real-world (as opposed to comic book) oil platform, Blackrock not only loses the platform, but its main designer, a young woman named Josie Beller, is severely injured. This image of a beaten Blackrock carrying Beller's unconscious body says it all. 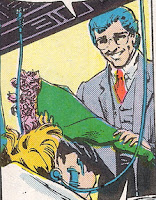 I need to pause a moment here to reflect on the fact that, although Blackrock is generally depicted as a man who wears glasses to correct his vision, this is not at all clear from these first two issues, where all images of Blackrock depict him wearing sunglasses (if anything's on his face at all), which admittedly do add to the impression of Blackrock as a rich guy (Don't you know? Rich guys always wear sunglasses!). However, when we see Blackrock visiting the now-paralyzed Beller at the hospital in issue #7 (shortly after the Decepticons steal another of Blackrock's facilities), Blackrock's need for corrective lenses is finally made clear. 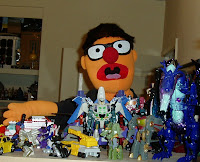 Also worth mentioning at this point is that Blackrock is only ever known by his initials, "G.B." The comic never gets around to revealing what the initials stand for. An interview with author Bob Budiansky revealed that Budiansky named Blackrock after a friend of his: one Gary Bennett Schwartz, and thus it could be assumed that "G.B." stands for "Gary Bennett." I prefer to consider this as a "fun fact," but not necessarily canonical information. When I assembled my Muppet last month, I did intentionally seek to approximate a Muppet form of Blackrock (actually, it's a double-homage, as others have rightly pointed out that it's a kind of "Mini Mark," as well). At the time I introduced the Muppet, I solicited suggestions for names. I have since settled on "Gary" as the name for the Muppet, so there you go.

I'll get back to detailing the history of G.B. Blackrock in a few days. Next up: Blackrock fights back!
Posted by Mark Baker-Wright at 7:30 AM