In the beginning, God created Rock-Paper-Scissors. Children would play this game, and it was good. And there was evening, and there was morning—the first day.

And God said, "let there be created Battle Beasts, expanding upon the rock, paper, scissors concept with cute little plastic animal toys that use wood, water, and fire instead. And let the Battle Beasts be connected to the Transformers line in the country called Japan, so that children who love transforming robots will also come to love the cute little plastic animal toys, despite the fact that the Battle Beasts shall not transform." Children would play with these toys, and it was good. And there was evening, and there was morning—the second day. 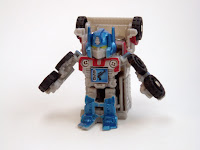 Finally, God said, "let there be created Bot Shots, utilizing the same play pattern, but this time using actual transforming robot figures. And let the weapons this time be called 'blaster,' 'fist,' and 'sword.' And then the children who were not fooled into loving the non-transforming cute little plastic animal toys would nonetheless come to love the Bot Shots." Thus the cycle of creation was completed. 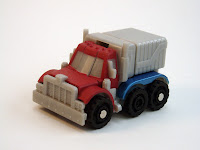 Obviously, with the Bot Shots having only been on the market a very short time, it's too early to tell how popular they will really be, but I think there's good promise. Not only do the toys utilize the familiar three-weapon play pattern, but they are also constructed to encourage children to crash the toys in their vehicle modes into each other as they "battle," thus triggering an automatic transformation into robot mode. As the rules of the game go, if only one toy transforms into robot mode, that robot wins the battle by default, regardless of what the weapon symbols would have shown.

I really do think that someone messed up big time with the rules, though. Look at this chart. I suppose "blaster beats fist" works all right, but there's no way "fist beats sword" or "sword beats blaster" makes sense. I think that they got the rules exactly reversed! (I think one could make a strong argument for "fist beats blaster" in close-range combat, but I have a much more difficult time imagining "fist beats sword" and "sword beats blaster" scenarios, while the reverse of each makes much more sense to my mind.) I have no idea if anyone at Hasbro has considered this. Maybe future versions of the game will update and/or correct the rules. If so, I suppose these rules could become collectors items?
Posted by Mark Baker-Wright at 8:00 AM