Doctor Who and the Borg: Part Four of Ten 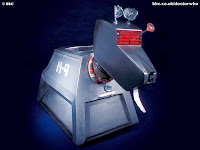 To go back and read Part Three, click here, or to go to the beginning, click here. Part Four begins after the jump.

Doctor Who and the Borg
by Mark Baker-Wright
Part Four

The Doctor paced the TARDIS control room trying to come up with a way to communicate with the strange, half-mechanical creatures. "They won't respond to any normal means of communication. What do you make of them, K-9?"

K-9 processed the question. "Alien creatures are connected to high-technology computers and machinery. Hypothesis: The creatures' minds are tied into a central computer."

"Computers?" the Doctor exclaimed. "Sounds too much like the Daleks and Cybermen to my liking. K-9, can you make contact with their computer system?"

At that moment, a light flashed on the TARDIS control board. "Look, K-9!" the Doctor proclaimed. "We're being hailed!" The Doctor flipped a switch, and soon the room resounded with the sound of a vast number of voices speaking in unison. "We are the Borg. Your vessel has been identified as a type unknown to our technology. It will be assimilated into the Borg design."

"Resistance is useless. Your vessel will be assimilated." The communication was over. It appeared that the Borg were not willing to discuss the matter further. As far as they were concerned, the TARDIS was already theirs. Whatever the Doctor could tell them was pointless.

"Yes," the Doctor said at last, "definitely too much like the Daleks and the Cybermen for my liking. I must say, though, K-9, at least the Daleks and Cybermen could be counted on for a good argument."


After the Enterprise crew finished transferring supplies to the Dinarisis, a message was received from Starfleet Command. Its contents were brief and to the point:

To Captain Jean-Luc Picard, commander, USS Enterprise. You are hereby ordered to continue to Dinar VII to prevent the Borg from further invading Federation territory. You are to use any means at your disposal to complete this mission, up to and including the loss of your ship and crew.

So, the captain thought, the confrontation is no longer just a possibility. It's reality. "Commander Data, lay in a course for Dinar VII."

As the android navigator plotted the course that would take them into battle, Picard pondered the very real possibility that nothing, including the loss of his ship and crew, would stop the Borg invasion.


The Doctor flipped a few switches on the TARDIS console. "Well, K-9, it would appear that we have worn out our welcome. I think it's time we left." With that, the Doctor finished his adjustments with a decisive thump on the console. The TARDIS dematerialized from the Borg ship.

Through the TARDIS monitor, the Doctor and K-9 viewed the monstrous cube of a ship they had just left behind. The planet they were orbiting now appeared only as a crater-ridden rock.

"Of course," the Doctor continued, "we can't just let creatures that can do that to a planet just run around free. It's bad for vacationing! Can you imagine going to spend a nice weekend on the beach and then finding out that the entire planet has been reduced to a barren rock?"

"I do not comprehend, Master," K-9 replied. "Please restate question."

The Doctor hit a few buttons, and the smaller vessel appeared on the monitor. "Thank you, K-9. I think we've found our opposition. What say we go pay them a visit, shall we?"