For quite a few years now, I've made it a practice to post Transformers articles with artwork featuring the character, typically artwork that was used on the packaging the figure came with. While this isn't the case for this week's feature on Lio Convoy (this artwork comes instead from a club story that introduced the character), it was the case for last week's feature on Nova Prime. Nova Prime's artwork was fairly distinctive, and I'm sure fans not already familiar with it wondered what was going on with it. By now, at least part of the answer should be obvious, since both Nova Prime and Lio Convoy use the same base mold, rendered in different colors. 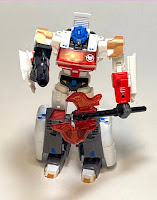 While Nova Prime was a figure one had to specifically buy from the club as a member, Lio Convoy was the figure that all club members got with their membership (provided their membership was current as of March of 2015). Presumably this means that there are more Lio Convoys out there than Nova Primes, but I never was able to get production numbers for these toys (for those who don't know, I've tracked this kind of information for years via a set of what I call "data pages." Here's a link to the page relevant to these figures, although with the recent closure of Captured Prey, whose server has hosted the pages for several years, I don't know how long they'll remain at this site). 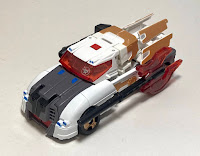 Lio Convoy was based on a character from the Japanese Beast Wars II cartoon, but this version (obviously vehicular) isn't a "pre-Beast form" in quite the same sense as, say, the BotCon 2006 set, where all the characters were depicted from a time before the stories we'd already seen. Rather, this Lio Convoy comes from a different continuity, which the club called Beast Wars: Uprising. The basic premise of this story is that, like in other continuities, Maximals and Predacons were decedents of the Autobots and Decepticons of G1 and similar continuities, but who existed essentially to continue fighting the war on their ancestors' behalf. Lio Convoy eventually sought to forge a destiny independent of this ages-long battle, and thus led his fellows in an uprising (hence the title) that would eventually change the face of Cybertron forever. While this character did eventually gain a beast mode, the story was entirely different (and, indeed, I think that beast mode was based off of yet another toy).

The club used this mold one further time, as the BotCon 2015 customization class exclusive. This time, the intention was to create a Beast Wars: Uprising character named Galva Convoy, based on a "Lucky Draw" figure recolored from the original Lio Convoy toy. The version seen here was an early run, which like the early-run version of Nova Prime featured last week, still has the Orion Pax head rather than the one created for the club figures (indeed, I got both figures at the same time via Pete's RoboCon). As a customization class figure, it is entirely unpainted, and I'm debating whether or not to leave it alone. It's a fairly unique figure, and I'd hate to spoil it.

Ultimately, I do think that the Nova Prime box art, while striking, is a bit misleading, as it suggests (to me, at least) an evolution from Galva Convoy to Lio Convoy to Nova Prime. But the fact is, these are three mostly unrelated characters, even in the fiction (one could argue for a relationship between Galva Convoy and Lio Convoy, but not from either of these two to Nova Prime, and even that relationship... well let's just say I'd have arranged the images differently). One wonders if there was an intention for the Nova Prime figure that never quite panned out in the club fiction. I doubt we'll ever know for sure....