It has long been understood that Optimus Prime is not the only character in Transformers history to have the name "Prime," but in most continuities, he is the only character to currently possess that name. There are a number of reasons for this, both real-world and in the world of Transformers fiction. In the fiction, the name "Prime" is usually* used to designate that a character is someone special, either the leader of the Autobots or one of the original Transformers from the dawn of creation (if not somehow both). In the real world, the folks has Hasbro have similarly determined that "Prime" is a name of importance, and that its usage should be monitored carefully (leading to occasional fiascoes like that which accompanied the name of the first club combiner). Given this reality, it's perhaps something of a surprise that the club was allowed to use the name "Nova Prime" on one of their toys. 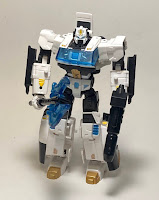 The TFWiki, chronicler of everything within the Transformers multiverse, says that this figure is intended to represent the Nova Prime character that featured in the IDW comics continuity (the one that ended in 2018, that is), but so far as I can tell, that Nova Prime never appears in this form (which, of course, was dictated by being a reuse of the Generations Orion Pax toy, given a new head... about which I'll have more to say in a bit). Nor can I tell that any club fiction uses this Nova Prime character. That said, the tech specs bio that comes with the toy doesn't preclude it. 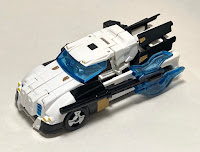 There is a Nova Prime character in the club fiction, however. In a climactic tale set within the "Shattered Glass" universe, that reality's Optimus Prime (an insane, evil tyrant in this universe) has an experience with that reality's Unicron (a benevolent figure in this universe) that restored Prime's sanity and changed him into a new being (analogous to Megatron becoming Galvatron, as first depicted in the 1986 Transformers: The Movie). The newly named "Nova Prime" is clearly depicted as being represented by this toy, and this is the character I think of when I see the toy. However, as I said, nothing precludes the toy from doubling as the IDW character as the TFWiki suggests. I just don't see the evidence for it.

During the recent online edition of Pete's RoboCon (required by the current COVID-19 pandemic), fans had an opportunity to purchase some Fun Publications-era club and convention figures, including a few unusual specimens. Pictured here to the right of the standard-release version of Nova Prime is an early run version of the figure, still possessing the head intended for Orion Pax. In many ways, it's only very subtly different, and so I'm a bit surprised they went to the trouble of making the new mold for the official figure (certainly there have been other figures from Fun Pub's tenure that didn't get new heads that arguably needed them more, but this is well-trod ground). The early run version also has some subtle paint differences. The gold paint, for example, is a touch lighter. It also seems to me that the Autobot symbol behind the blue windshield is a bit different, but I honestly can't tell if it's just a different shade of red, or if the official version was actually given a purple Autobot symbol (which would be in keeping with the character's origins as Shattered Glass Optimus Prime). Since I'm not going to take either of these figures apart to find out, this will remain a mystery unless someone braver than I am has taken their figure apart and wants to share!

*Animated was notably an exception to this rule. In Animated, to be a "Prime" was merely to be a reasonably high-ranked officer, akin to "Captain" of a ship. In Animated, the "Magnus" was the high mucky-muck.
Posted by Mark Baker-Wright at 9:00 AM