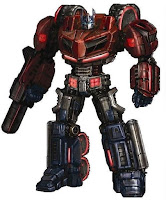 One of the reasons that the current War for Cybertron trilogy caused some confusion (especially when it was first announced a couple of years ago) was that the name had already been used back in 2010. At that time, Transformers: War for Cybertron, was a video game (or, given the differences between versions of the game created for different gaming systems, perhaps it should be considered a set of games) published by Activision setting the action on Cybertron in an era before the Transformers came to Earth. This provided the opportunity for several toys to be created, depicting characters as they appeared in the game(s). 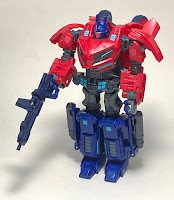 While the specimen pictured here came out as part of an "Evolution Pack" box set under the Transformers Tribute sub-line in 2017, this mold was first released in 2010 as one of the War for Cybertron-styled figures under the Generations banner. It has somewhat brighter colors than the original, which was no doubt influenced by the rather dark tones of the game itself (just look at the picture above!), but is nonetheless a fairly faithful adaptation of the game character, which has a distinctive look that is unmistakably Optimus Prime, while simultaneously dissimilar to any other Optimus Prime toy seen before or since (including the game's own sequel, which was still set on pre-Earth Cybertron). 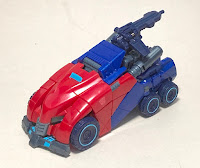 The attempt to give Optimus Prime a pre-Earth, Cybertronian form is most evidenced in the toy's alternative mode. Again, a clear effort has been made to make Prime vaguely "truck-like" (as the vast majority of Optimus Prime toys have been) while creating something new. I definitely find this result quite creative. However, it is one of the more fiddly deluxe-sized toys in memory, and quite frankly isn't that much fun to transform. This toy thus is one of those that tends to stay on my shelf, and I keep it mostly for the oddity that it represents. You might feel differently, of course, but unless you find one loose for a cheaper price than what I've seen when I've looked for this toy (or its earlier versions) on eBay, I can't really recommend spending so much money on it.
Posted by Mark Baker-Wright at 9:00 AM