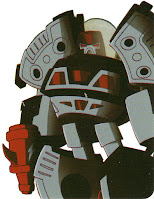 Although TFCon is an unofficial convention, and thus (unlike BotCon up through 2016) could not feature official Hasbro molds, TFCon nonetheless routinely features exclusive toys that homage Transformers characters and concepts. A toy from third-party manufacturer iGear named Roswell, one of the several exclusives from the 2013 convention in Mississauga (a city neighboring Toronto), is a multi-layered homage.

As is perhaps obvious to seasoned Transformers fans, Roswell's mold is patterned off of that of Cosmos (if definitely a bit larger than any official Cosmos toy released to-date), and in fact is a recolor of toy called "UFO," which duplicated Cosmos's basic color scheme. Roswell, however, seems to be specifically an homage to a character named "Path Finder," and here's where the layers come into play. 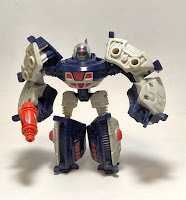 The original Path Finder toy was in Tonka's "GoBots" line, and like Cosmos, also turned into a "flying saucer"-type spaceship. About twenty years later, Takara released a blue repaint of Cosmos as part of an exclusive set intended to homage several GoBots characters, and this blue toy was indeed intended to be named "Path Finder," although a late decision, possibly fearing legal retaliation from competitor Bandai (who still own the original GoBots molds to this day), removed the actual name from all packaging materials. Roswell's shade of blue is decidedly darker than Takara's "Path Finder" toy (this digibash from Roswell's wiki page is much closer to Takara's colors), and I cannot help but wonder if the color scheme was changed to offer a compromise between the blue-and-yellow of the Takara toy and the grey-and-white of Path Finder's original GoBots toy. 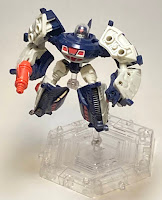 Besides the somewhat larger size and increased detail in Roswell (when compared to official Cosmos-mold toys), Roswell comes with a couple of accessories. Perhaps most obvious is the clear acrylic stand that enables the owner to display Roswell in "flight" while in flyer saucer mode (as above) or in robot mode (as to the right, here). The other accessory is the small hand gun, which in the case of Roswell's toy is named the "path cannon," in a clear attempt to homage the Path Finder character. For fans who like toys that harken back to simpler times, or those with a deep knowledge of Transformers (and GoBots) history, Roswell is worth looking for.
Posted by Mark Baker-Wright at 9:00 AM